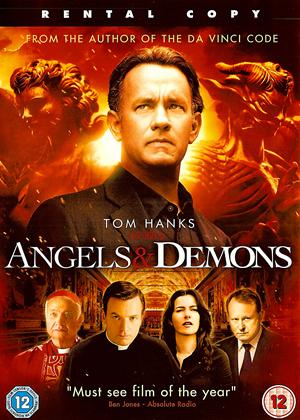 Reviews (6) of Angels and Demons

Emjoyed it but not as much as Davinci code. As usual Tom Hanks is all knowing and incredibly clever working out all the clues. I knew I should have gone to confessiion!

Da Vinci watered down - Angels and Demons review by AW

As others have said not reaching the same heights as Da Vinci Code, I put that down to the slightly less interested acting of Tom Hanks and also the female lead which is a bit of an over exuberant wet cloth. Worth a watch for conspiracy fans, however I did leave the settee a little disappointed.

Angels & Demons is a pretty disappointing second attempt from Ron Howard. The book itself is no classic but would make an ideal basis for a pulp thriller. Instead the final film is way too long and is extremely pedestrian in its pacing. Tom Hanks is perfectly cast as the bland professor called into action by the Vatican. McGregor relies upon a terrible Irish accent and Hank's female counterpart is little more than window dressing. Overall Angels & Demons is poor, yet it does feature an amazingly stupid helicopter scene, which almost rivals Traitor's bus finale in terms of scriptwriter madness.

Not a bad book, better than it's sequel, terrible conversion to screen.

Dan Brown, again strikes on controversial ground. Dealing, this time, with the ongoing battle between catholicisim and science, the book has an interesting concept which the film simply fails to convey.

The acting is flat, the material cut from the book is better than some of the stuff kept in, and the atmosphere is entirely dependant on the scenery.

In short, not a film I'd watch twice, and that's saying something.

If at the end of the film, you're left wondering why the antagonist did it all, read the book for the rest of the answers.

Not as good as the first, but an enjoyable watch, even if it did slip somewhat from the books plot. Loved the scenery but who wouldn't and liked the performances of the main characters. Thought some of the support were not quite on the mark, bit like the plot towrds the end.