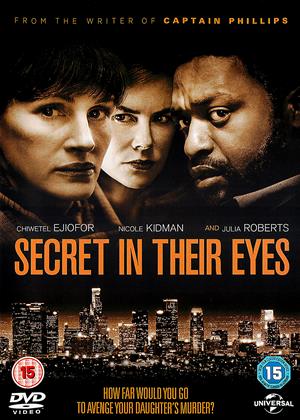 Reviews (4) of Secret in Their Eyes

A plodding, talky, 'politically correct' remake of a the way superior Argentinian original - Secret in Their Eyes review by PV

The first thing to say to anyone who watches this: forget your prejudices against subtitled cinema (if you have any! I don't!) and rent out the original Argentinian film - from around 10 years ago. It is WAY superior to this Hollywood remake and is set against the backdrop of the dictatorship in Argentina which makes it way more fascinating than this bodged remake.

Also, in the original the classic twist at the end if better (NO SPOILERS HERE).

I resent the way this remake is riddled with 'political correctness' - it must have a black lead and 2 female characters in charge. The superior original does not faff around with such nonsense and is consequently MUCH more believable. It's about a husband-wife not as here a mother-daughter. This movie seems to be trying hard to tick the pc diversity boxes - and boy, is it trying...

And I for one just do not believe in the inter-racial romance storyline - not in the USA where both white and black people really don't go in for that much at all.

Some pointless and unbelievable subplots and back stories here as the plot flits back and forth between 2002 and 2015 like some social issues movie moth. This tries to be relevant by having a CT (counter terrorism) unit and a mosque and the rest of it - which never really gels at all. The movie plods and plods along with not much happening then thinks it has to make up for it so it has a big scene in a baseball stadium.

Predictably disappointing. 2 stars. The ORIGINAL film from Argentina is a 5 star classic though.

This film could have been made as a B-movie to some other production.

Nicole Kidman and Julia Roberts have a poor dialogue to work with. Their cardboard-like characters gesticulate repetitively but add little of interest. The story is quite improbable. A contrived plot with much emotion but little else.

Most enjoyable. - Secret in Their Eyes review by RT

Was most impressed with the acting of Chiwetel Ejiofor in the lead role. Nicole Kidman was rather wooden while Julia Roberts was good in support. A very enjoyable film with a twist in the tail.

Grossly overrated Oscar winner that's something of a plodder unless you're in a forgiving mood. However, if you get tired of all the chat, fast-forward an hour in for a jaw-dropping shot that almost redeems the whole thing. Out of the blue comes a 5minute, gravity-defying masterpiece of camerawork that begins as an aerial shot and evolves into a hand-held chase through the back alleys of a football stadium. Pure, mind-boggling cinema, only replicated with cgi in the Hollywood remake, that unfortunately shows up the rest of the film for the slow-burning talkie it is.