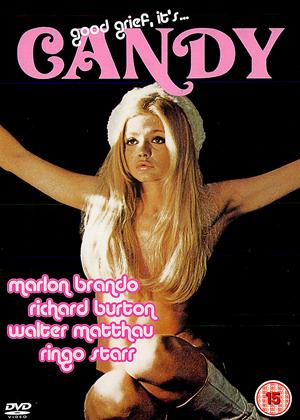 Making a bad movie isn't difficult. Even the greatest directors have all done it at least once. But it takes a certain kind of perverse genius to make a movie so jaw-droppingly bad that it seems to be a parody of itself. "Candy" achieves this magnificently.

From the trippy cosmic opening sequence revealing our heroine to be an extraterrestrial energy being, which is immediately shown to be untrue, has no bearing on anything, and is never mentioned again, to the closing credits accompanied by a song by the Byrds which is the best thing in the film, partly because it's also the last thing in it, this chaotic hotchpotch of incredibly sexist and even more incredibly sixties nonsense looks like the kind of movie you'd write if you were on serious drugs, which apparently the writers indeed were. One of them has a small part in the film, playing a man who is literally barking mad. The other, the once hugely famous but now largely forgotten comic novelist Terry Southern, was also partly responsible for, amongst other things, "Barbarella" and that bonkers version of "Casino Royale" with David Niven as James Bond. Both of which are high art compared to this film.

Ewa Aulin gets the dreaded "and introducing" credit that usually means "slept with the producer", and sure enough, she's such a dismally lousy actress that when another character drunkenly confuses an inanimate life-size replica of her with the real thing and has sex with it, you can't really blame him. That character is played by Richard Burton, and is apparently meant to be a spoof of Dylan Thomas, though given Burton's problems with booze, it comes across as an alcoholic actor playing a savage caricature of himself. He doesn't look or sound happy, and delivers his lines in such an odd and disjointed way, with long pauses in all the wrong places, that I'm pretty sure he was reading them off the scenery.

John Astin, the original Gomez Addams, gives a surprisingly good performance as Candy's uptight dad and his considerably less uptight twin brother, which is all the more surprising when you count the number of people in this film usually considered to be much greater actors than John Astin who are outperformed by him because they simply can't bring themselves to read these awful lines with conviction. Walter Matthau looks particularly uncomfortable, while Marlon Brando as a very fake Indian guru doesn't appear to be bothering to act at all. Ringo Starr, bizarrely cast as a Mexican, does attempt to act, but he really shouldn't have.

As this stellar cast bumble around looking deeply embarrassed, the plot, such as it is, meanders along by having the title character blunder into weird predicaments where almost every man she meets attempts to grope, seduce, or just plain rape her, and usually succeeds because she's too naïve and stupid to say no. But since this is a sixties movie and therefore has to be arty and satirical, these smutty situations invariably drag in heavy-handed anti-establishment symbolism and end up being as pretentious as they're tasteless. The whole dog's breakfast is rather like "Zardoz" reimagined as a Carry On film, and I don't mean that in a good way. Oddly, considering what it's about this film has remarkably little nudity, presumably in an attempt to avoid the dreaded R certificate.

Possibly worth watching ironically just to persuade yourself that such a thing exists, and it might make an interesting double bill with "Beyond The Valley Of The Dolls", which, believe it or not, is a better movie. Marlon Brando later admitted it was the worst film he'd ever been in and he only did it as a favour to a friend. Ewa Aulin went on to land rôles in a few obscure Italian B-movies and an uncredited bit-part in Monty Python. She's the girl who gets jostled by the Hell's Grannies. A fitting capstone to a glorious career.

Saw it first time out, and although bits of it have dated and are "uncomfortable, in total a film for those that like the odd perspective on life. The start of human exploration in the 1960s.