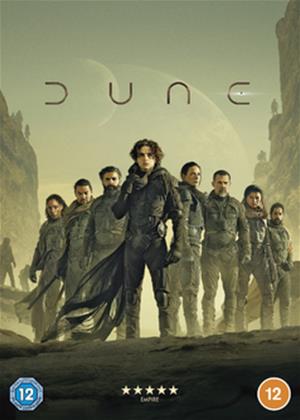 Wow! The scope, the sound, the story, a masterpiece. Dennis Villeneuve is a great Director and visionary. Watched the David Lynch version just the other day, have seen it 4 or 5 times and I think only recently did I sort of understand all of it. I was surprised how much from David's version was in Dennis's version. I suppose it helps that there will / should be a sequel. I wonder if David had the chance would he have done a 6 hour version, perhaps that would have worked. Soundtrack is amazing, very much like Blade Runner 2049 in parts (which isn't a surprise) and some of the shots were like BR as well, no bad thing. Don't want to give any more away, but is well worth a viewing, I want to go and see it again.

Better entitled Dune Part 1 (that's what you'll see in the opening titles) this is an epic blockbuster of a film and a real achievement from director Denis Villeneuve. Adapted from roughly the first half of the much celebrated novel by Frank Herbert this film is probably best described as Star Wars meets Lord of the Rings for anyone unfamiliar with the complex world in which it is set. Both those series are strong influences here in a science fiction drama set many years in the future where the Universe is governed by an Emperor aided by a number of big Dukedoms. The key to the Universe is a magical spice that allows unlimited space travel and has some mystical qualities. It's only found on the desert planet of Arrakis. The Emperor hands control of Arrakis to the Atriedes family pushing out the brutal Harkonnens, who resent losing their control. Duke Atriedes (Oscar Isaac) suspects political conspiracy in his appointment and his son, Paul (Timothée Chalamet) keeps having strange dreams about the planet and it's people, the oppressed Fremen. Soon the Harkonnens plot their revenge. Here we have a complicated world that involves strange powers, strange creatures, intrigue and various types of peoples. It's intricate, mesmerising and intelligent and the story has plenty of great action. The effects are magnificent and the visuals are powerful especially of the desert world but also the spacecraft and futuristic cities. Superb cast too including Rebecca Ferguson, Charlotte Rampling, Dave Bautista, Zendaya, Javier Bardem and Stellan Skarsgård. Don't be put off by the poor 1984 version, this new one is ambitious, faithful to the novel and epic cinema at it's very best. This is a film that needs to be seen on the big screen where it can be best appreciated.

Denis Villeneuve has done it again - this is the Dune we've been waiting for. Well-acted, easier to follow than David Lynch's 1984 adaptation, and cast with a great set of actors. The look and feel of the film is spot on and part 2 should be made to complete this story. Dare I say it though, as good as the backdrop and acting was, I found it a bit dull, and the lack of characterisation (everyone is reduced to ciphers) a bit disappointing. So, the jury is still out until the second film comes out.

It's very cinematic, lots of impressive visuals. The sound track is very effective if a little over used in places. Good acting, it's generally a really good film however it left me a little cold, and I found it a little unengaging, much like Blade Runner 2049. It doesn't have the charm of Lord of the Rings, and the characters are less likeable.

I'm a fan of the book and the story in general so my expectations were high going in, and I suspect it maybe one of those movies that needs rewatching to take it all in, especially because it's pretty long.

Overall I would recommend it, and it is worth seeing at the cinema for the big screen visuals, however some may find it nice to watch at home so you can take a break half way through!

Frank Herbert’s novel Dune could be compared to Alan Moore’s Watchman as a book that is destined to be unfilmable. The fantastic tale of starships, shields, spice, sandworms, feuding houses, and magic witches with deadly voices seemed too dense to ever become a film. Attempts had been made previously. Some failed in the 1970s and others were a mixed bag in the 1980s. Finally, we have a version of Dune that may be one of the best adaptations to date.

It helps that the project has noted director Denis Villeneuve at the helm. His previous work on films like Arrival and Blade Runner 2049 have proven that he’s more than capable of handling science fiction on a level past simplistic spectacle. He allows his films to breathe with a great air of contemplation and introspection. Considering how much of Dune is dependent on Paul’s inner thoughts and visions, there’s no other director I would trust with such material.

The film, posed as part one of the book, remains relatively faithful to the story but with a more unique perspective. While the book unloads some exposition and gives us a few first of House Atreides, this film shifts the focus to the spice desert planet of Arrakis immediately. Chani (Zendaya) is a Fremen of this land and narrates how the Spacing Guild treats her planet as one that is destined to always be occupied. The Guild relies on the spice of Arrakis for both sustenance and a means of powering starships that can fold time and space. They bequeath the production of spice on the planet to a House/planet that will occupy Arrakis for a set period of time. House Harkonnen has just finished its stay and House Atreides is due to take control of the planet and its spice production.

Before departing for the planet, the Atreides prince Paul (Timothee Chalamet) has started to have premonitions. In his dreams, he can see Chani. He can see a revolution. He can see the death of his best friend and knight Duncan Idaho (Jason Momoa). There is doubt in his mind but doubt is something he is not allowed to have. Considering Paul’s mother (Jessica Ferguson) is a Bene Gesserit, there’s a lot of pressure on Paul to live up to his mother’s abilities to control others with his voice. He has been taught not to embrace fear and to accept his destiny.

What Paul isn’t clear on is the political war between House Atreides, House Harkonnen, and the Spacing Guild. In truth, some viewers may not even be able to connect the dots right away considering how atmospheric Villeneuve treats the material and doesn’t let dialogue linger for too long. As an adaptation, there’s a beauty in this kind of direction, where the visuals and settings take precedence over the dense dialogue and almost Shakespearean delivery for the writing of this caliber. You may also need a bit of a road map that some of the books provide. Remember, the director’s cut of 1984’s Dune had a nearly 15-minute prologue just to set the stage.

The adventure proceeds with plenty of moody and epic scenes. We spend some time on the House Atreides home planet of Caladan, where Paul takes his last touches of water and dirt before leaving it behind for a scorching planet of sand and rock. Arrakis feels grand and dangerous, where a coming sandworm attacking a spice crawler is frightening for how the ground quakes and towering worm can swallow vehicles whole. Each faction has its own traditions and style that makes them all the more intriguing to watch and decipher. From the royalty of House Atreides to the vicious grotesque science of House Harkonnen to the honor-bound codes of the Fremen. All of that fascinating lore from the book remains.

The liberties taken with some of the material are rather clever and understandable. Aside from the aforementioned focus of Arrakis, characters like Doctor Yueh are used with great staging. In the book, Yueh is known very early on as a conspirator but the film makes this double-cross more of a surprise. I also dug the way Dr. Liet-Kynes takes a more cold approach towards the Atreides and how they treat the planet of Arrakis, despite being present mostly as a third-party for the Spacing Guild.

Dune is absolutely not going to be everyone’s jam of epic fantasy and that goes double for those who could never get into the book with the abundance of its own terminology and various factions. For those who have dug the book or enjoy deciphering a richly detailed world of warring kingdoms, prophecies, and spirituality, Dune delivers on this front. The film is not without its fault in its cold nature and there are some questionable choices in staging here and there. Overall, though, it’s pretty much the Dune I knew Villeneuve could deliver and I’m pleased to see the book on the big screen, even if it’s only half the story for now.