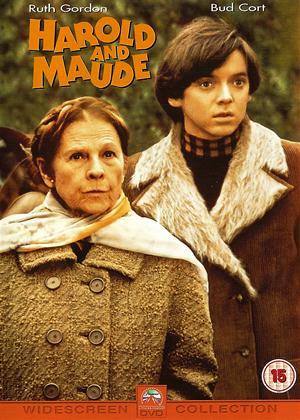 Reviews (5) of Harold and Maude

A timeless classic - Harold and Maude review by CP Customer

Harold is an odd young man with a preoccupation with death. Constantly faking suicide to get the attention of his inattentive wealthy mother, this wealthy young man spends his time attending the funerals of strangers and cruising around in his very own hearse. While attending a funeral he encounters 79 year old Maude, a fellow 'funeral gatecrasher', and a woman like no other he has ever met. Together, they embark on a life changing friendship. Maude teaches him to embrace life, challenge authority and awakens his spirit to the world around him. 'Harold and Maude' is both about learning to embrace life, finding joy in the little things, not taking a moment for granted, and at the same time a dark comedy about two if life's misfits who find friendship and love in the company of one another. My only complaint about 'Harold and Maude' is that I didn't make time to see it sooner.

Eccentric but dated - Harold and Maude review by JD

Delightfully eccentric film about a lad with a preoccupation with suicide. There are memorable scenes of his suicide bids, the first being the most shocking and subsequent attempts getting more comical. The style of acting and direction are dated and for my taste distant and impersonal. Some of the plot is unexplained. The unique humour is the outstanding feature which remains quirky and enjoyable throughout.

I found this film strange initially to get into but once the weirdness was accepted I found it uniquely interesting,amusing and charming. Rent this out if you want a change to the run of the mill "hit movies".

Harold is a young man constantly faking suicide in bizarre ways in an attempt to get the attention of his extremely wealthy, but cold, socially climbing mother. She does her best to take over his life, including trying to find him a 'suitable' wife through a dating agency. Harold manages to see off his suitors by inflicting unusual staged injuries on himself in their company. Harold eets an elderly lady, Maude, at one of the funerals he likes to gatecrash. Her total disregard for rules and free spirit teaches him about life and love. This is an absolutely delightful film which is extremely funny, yet with a sad twist. I wish it was a little longer as the relationship between Harold and Maude is one to relish!

I watched the first twenty minutes of this film and gave up on it. Something about it did not appeal to me. The humour seemed very dark and deadpan and I did not find the "suicide attempts" and the mother's narcissistic disregard of them very laughable.

I admit I didn't give the film much of a chance to move into a more positive mood, so it may be that I missed the best part of it.

Also, there seemed to be no option to use subtitles so I missed a lot of the dialogue - which didn't help.

Just not my cup of tea.