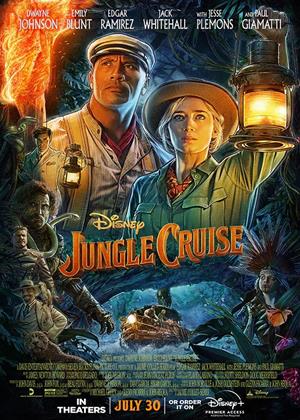 Sign up
Jack Whitehall: Gets Around: Live from Wembley Arena

Sign up
Derren Brown: Something Wicked This Way Comes

Disney once more dips into its own properties for profitable content but this time to the lesser-delved well of their theme park attractions. They had some major success with Pirates of the Caribbean but that franchise has clearly run its course (or should have after nearly two decades). One may be left scratching their head how their watery attraction of Jungle Cruise could be made into a film but, hey, just look at Pirates. Surprisingly, it’s a suitable platform for staging some great swashbuckling adventure perfectly built for summer entertainment.

It is the early 20th-century and gutsy British scientist Dr. Lily Houghton (Emily Blunt) is hoping to uncover the elusive Tree of Life, thought to be a myth that was sought by Aguirre. Lily doesn’t take kindly to her requests for transport and essential treasures being denied by a stuffy organization of explorers and takes matters into her own hands. With the aid of her nervous brother McGregor, she manages to swipe a key piece of the puzzle before setting off on her journey.

To travel through the jungle to find this mystical MacGuffin, she enlists the help of another troublemaker, Captain Frank "Skipper" Wolff (Dwayne Johnson). Frank has his own ship but he’s also a scammer with his boat tours and is armed weapons-grade dad jokes, infecting others with eye-rolls. Having money issues of his own and being a selfish guy who keeps to himself, Frank isn’t keen to help out Lily on her jungle adventure unless money is involved. When he discovers she may have an artifact that could reveal the Tree of Life, however, that cost drops significantly.

They’re not the only ones looking for the treasure. German aristocrat Prince Joachim (Jesse Plemons) is aiming to find that tree at any cost to win the current World War. He not only takes his submarine to the jungle for comfort and torpedoes but also seeks his own ally in lifting the curse of the entombed Aguirre and his trapped men. Having been confined to the river, Aguirre’s forces have been cursed by the tree to never leave the river and become bound by various elements. Aguirre is composed of snakes while his other men are made out of bees, trees, and everything in between.

In the tradition of time-honored jungle adventures, Jungle Cruise has some snappy and exciting chemistry, particularly between Johnson and Blunt who are having quite a bit of fun on this journey. The action, of course, is quite thrilling with an elaborate showcase of jumping off boats, steering around rapids, and avoiding torpedoes. For seeking the Tree of Life and being pursued by undead conquistador, the fantastical elements are dazzling, though I’m certain it’ll draw obvious criticism for being compared to Pirates, especially when the film involves captains and immortality.

Director Jaume Collet-Serra, who is no stranger to action, brings a sweeping sensation to the adventure where there are stakes and personal motivations but also a lot of charm and wonder. Part of that credit should go towards James Newton Howard’s music that creates a sense of magic and thrills. The atmosphere also has this throwback feel to the adventure serials of lore, sure to please audiences young and old.

Jungle Cruise doesn’t redefine the jungle adventure formula but gives it a fresh coat of paint to become the perfect type of summer movie. The performances, stunts, and energy is all great fun and features enough exciting set pieces and adventure elements to be a solid addition to the line of family-friendly adventure flicks. It probably won’t be as well remembered for being little more but for sticking to this genre, it’s a great time.