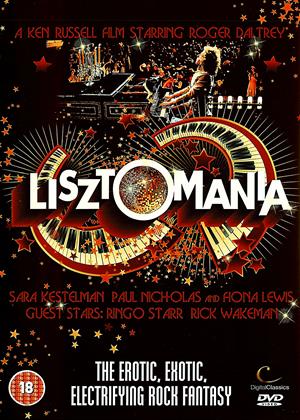 In case anyone believes this film to be a documentary because this rental company classifies it as one, I assure you that, even though all the major characters were real people, a documentary it most certainly is not! I can only assume that whoever decided it was one was under the influence of alcohol or drugs (I notice he or she didn't even manage to copypaste the plot summary correctly). Of course, I could be wrong. I'm no expert on 19th century Europe, so maybe Richard Wagner and Adolf Hitler really were the same person, and maybe he/they liked nothing better than massacring Jews with a weaponized electric guitar. And maybe Franz Liszt, when he wasn't too busy playing the piano, hunted vampires with a flamethrower, flew around in a magic transparent spaceship, and sometimes got erections ten feet long.

I'm not making this up! At the top of the page you can see a couple of photos of Franz Liszt's spaceship, though for some reason, none of his ten-foot penis. But I assure you that, according to this film, he most certainly had one! You'll probably need to watch that sequence twice to reassure yourself that you weren't hallucinating the first time. I haven't a clue who Ken Russell thought his target audience were. Teenage fans of The Who at the height of their fame and lovers of classical music alike must have been repelled by Roger Daltrey playing Liszt's piano music surprisingly well (apparently that really is him playing) while simultaneously ruining it by singing dreadful pop ballads. And everybody must have been utterly baffled by almost everything else that happens.

Then again, this is a movie in which Pope Pius IX is played by Ringo Starr. It's so wildly inaccurate that the descendants of Richard Wagner tried to sue Ken Russell, but couldn't because the law of libel only applies to the living. I'm surprised Marvel Comics didn't sue as well, since this film includes the unofficial screen debut of a character who has since gone on to far better things. By the way, that's Rick Wakeman in the superhero costume.

But you know what? I'f you're in the mood, it's a lot of fun! You certainly haven't seen anything quite like it before, and you're unlikely to ever again. It's dreadful, but in a genuinely so-bad-it's-good way, and unlike dreck such as "Snakes on a Plane" or the entire output of Troma, it's honestly trying to be an excellent movie with a serious point to make. The extent to which it fails has to be seen to be believed. It was at round about this time that all the major studios decided Ken Russell wasn't a genius after all and stopped giving him money. You can see why - this chaotic, insane movie looks and sounds like an opera written by Tim Burton and directed by Ed Wood on acid. All the same, there's something oddly lovable about any historical drama which includes the line: "Piss off, Brahms!"

Poor old Liszt. Transformed by Ken Russell into a rock star, Liszt battles against the proto fascist Frankenstein meets Dracula figure of Richard Wagner. A bit of Metropolis, Strangers on a Train, Chaplin and Harpo Marx thrown in for good measure. I missed the kitchen sink but it must be there somewhere amongst the writhing naked bodies and phallic symbols. None of the stars or guest stars can act to save their lives with the possible exception of Paul Nicholas. The silliest Ken Russell film I've ever seen and that's saying something!