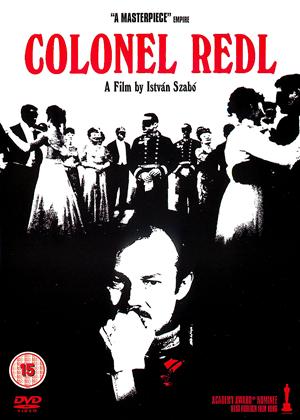 Sign up
James Bond: The World Is Not Enough

Istvan Szabo made three films with the powerhouse actor Klaus Maria Brandauer, all of them about compromises individuals will make to gain favour with the powers that be. 'Colonel Redl' is set in the Austro-Hungarian Empire just before World War One.

A good soldier is one who betrays friends; one who holds long-held beliefs but is prepared to proclaim the antithesis, and moreover publicly condemn those who hold the same belief. Duels take place to uphold these honourable practices. Anyone who isn't a virulent racist is looked on with suspicion. Being born outside the gentry, and being ambitious, means forgetting you ever had a family. Young Redl makes a decision to remain at cadet school for a ceremonial evening rather than attend his father's funeral. Much later, when his sister comes calling at the barracks, the adult Redl can hold back his emotion for a short time only: polite and considerate to begin with but suddenly exploding in rage that his past should remind him of his dissociation.

His sympathy for Jews, his sexual orientation, all have to be thrown behind him as he climbs the ladder. But memories persist - in one scene chasing him in the form of a pack of dogs. Redl becomes chief of the Secret Police, seeking spies, and those who would betray their country. A more barbed betrayal, it would seem, is that of one's own self.

But it is the whole realm which Redl inhabits that is about to be thrown on the bonfire of the First World War. The dancers of the masked ball, dominoes disguising their true selves, casually waltzing into oblivion as the Monarchy and the military masters are about to sanction the greatest betrayal of all: not just of themselves, family and friends, but of millions of innocent lives.

Brandauer blows the roof off as Redl. All other performances are top-drawer, but you would be excused for not noticing, as eyes are permanently drawn to him as if to a force of nature. He somehow conveys an overweening determination to succeed alongside a hurt, as pinpricks of conscience score his soul.

it is rare for a film of 136 minutes to show no excess fat. Almost every scene is important, not only to understanding Redl, but also the place and times. I can't believe there is any other film which explains as forcefully why the military madness of the Austro-Hungarian Empire had to die - but at what a cost.