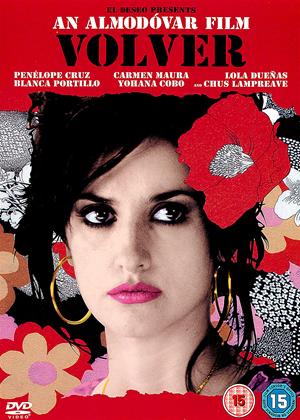 Chalk one up for the matriarchal society! - Volver review by Kurtz

Volver provides proof, if it were still needed, that the battle of the sexes has been decisively won by the girls' team.The women in this perky comedy-drama are all glamorous,resourceful and spunky, while the men are almost without exception feckless, venal and lazy and in some cases a lot worse besides. Any film made in the last twenty years that attempted to present women in such sweepingly negative terms would have been met with howls of protest.Perhaps Senor Almodovar didn't want his star turn Penelope Cruz to have to compete for the audience's sympathy with a mere male.In fact she does a great job here, and is far more appealing and less irritating in this film than she is in her Hollywood adventures.

In American films I find Cruz pretty but not inspiring. Spanish is clearly her medium. She was absolutely fantastic. The plot is bleak and the setting unglamorous but this film is eminently watchable.

This film has subtitles! Another triumph from Pedro Almodóvar ,Powerful and engaging, the beauty of this film is in the abundance of strong and interesting female characters. The film proves that Cruz’s personality is somehow lost in translation in a number of American films, In this film she protrudes passion and emotion in a way I thought not possible from the actress. If you’re looking for beautiful scenic romcom avoid, the sets are dull and the romance is scarce. The film when it comes down to it is really about death.

A wonderfully energetic and life-affirming film about female friendship, initiative and entrepreneurship, the pain of having to keep secrets from your children, the contrast between city and village life in modern Spain, ageing, ghosts, and much more besides.

Romance doesn’t play much of a role in the plot – all the women are either single, widowed or in rapidly failing marriages. But their singularity isn’t dwelt on or lamented - it’s just the way things are. The men generally don’t get much screen time. It wouldn't be accurate to say they are all swine, however, since Emilio responds sympathetically on learning that Raimunda has re-opened the restaurant without his permission, after hearing about her financial problems. Great performances from the cast, I especially liked the interaction between Raimunda and her sister Soledad (Lola Duenas), but it still wouldn't have been the same film without Carmen Maura as their elderly mother. Yohana Cobo is also very convincing as the teenage daughter who has had to grow up fast to cope with the strain of living in an economically insecure and fractious household - her body language is very much that of a 14 year old but she speaks with the wisdom and experience of an adult.

I feel obliged to say that there is a possible plot weakness involving the death of a male character early on and its cover-up; even if he was unemployed with no close relatives I found it a little implausible that there be would no-one who could report him missing and spark an investigation. But despite this flaw I still enjoyed it a lot more than the other two Almodovars I have seen, "Talk to her" and "All about my mother".

Fascinating and very funny. Pedro Almodavar at his best, and definitely worth watching again and again.