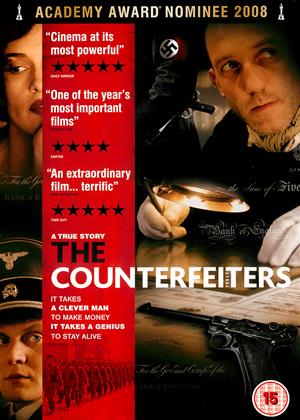 Synopsis:
The Counterfeiters is the incredible true story of the largest counterfeiters operation in history, set up by the Nazis in 1936. Salomon "Sally" Sorowitsch is the king of counterfeiters. He lives a bourgeios life of cards, booze and women. Suddenly his luck runs out when he's arrested and thrown into a Nazi concentration camp. His exceptional skills are spotted and he is forced to help the nazis in an organized counterfeit operation set up to help finance the war effort and flood the British and American economies with fake currency.
Faced with a moral dilemma, Salomon must decide whether his actions, which could prolong the war and risk the lives of fellow prisoners, are ultimately the right ones.
Actors:
Karl Markovics, August Diehl, Devid Striesow, Martin Brambach, August Zirner, Veit Stübner, Sebastian Urzendowsky, Andreas Schmidt, Tilo Prückner, Lenn Kudrjawizki, Marian Kalus, Norman Stoffregen, Bernd Raucamp, Gode Benedix, Oliver Kanter, Hans Peter Kortenbruck, Dirk Prinz, Hille Beseler, Erik Jan Rippmann, Tim Breyvogel
Directors:
Stefan Ruzowitzky
Writers:
Adolf Burger, Stefan Ruzowitzky
Aka:
Die Faelscher
Studio:
Metrodome
Genres:
Drama
Countries:
Austria
Awards:

Reviews (3) of The Counterfeiters

Harrowing - The Counterfeiters review by JD

The depiction of life for Jews in the German concentration camps has rarely been shown as such a violent and evil place. It is deeply memorable and haunting. The main character is very engaging. He has an extraordinary head and face, he is a forger, he is very mercenary with regard to working with the Nazi's who are so appallingly evil to the Jews but you can't help wanting to know more about him. A brilliant and striking actor. An awful film in the sense of full of awe for the horrible dilemmas facing the bullying, often fatal bullying, in the camps. Almost incidentally an incredible true story of record breaking forging.

Salomon Sorowitsch (based on Salomon Smolianoff's life) is the central character in this film. He is played by Austrian actor Karl Markovics, who is simply amazing in terms of his looks - a very angular face like a fish-knife - as well as his acting and his facial expressions. He barely twitches and always refrains from showing any emotions in the camp, and yet, you know exactly what he is thinking and how he is feeling about the situation at hand: his acting is simply outstanding and unforgettable - truly amazing.

The plot is based on a completely true story (you can read an account here, after watching the film: https://en.wikipedia.org/wiki/Operation_Bernhard), which is, itself, totally incredible: Nazi Germany set out to produce millions and millions of fake pounds sterling from a secret unit in the Sachsenhausen concentration camp. To that intent, a team of counterfeiters was put together, made up of printers, graphic artists, bankers, etc. Salomon, for his part, is put in charge of quality control as he is a career criminal and an expert forger. The head of the unit, within the camp - an SS officer who is a policeman by background - soon demands that they produce large quantities of US dollars, which are more difficult to make...

The environment of the concentration camps and the routine violence inflicted on Jewish inmates are horrific. What is interesting, though, is also the complex rapport between Salomon and the head of the unit, Sturmbannführer Herzog. Therefore, the film is interesting on many levels: as a historical drama depicting actual events; as a psychological drama set in the period of the war; and also, in fact, as a thriller, given the counterfeiters' mission.

It is hard to watch at times, given the nature of the context and story, but I would say that this movie is a masterpiece.

"I Tell You We Must Die" - The Counterfeiters review by CH

Kurt Weill and Bertolt Brecht's "Alabama Song" comes to mind while watching The Counterfeiters (2007), for this is the often-voiced fear of those in a concentration camp, and the lyrics are all the more apt when one thinks of the previous line: " if we don't find the next little dollar..."

Written and directed by Stefan Ruzowitky, the film has a plot which might sound fantastic but, as we have seen down the years forgery can take many convincing turns. The Nazis had, during the Thirties, rounded up a number of adept counterfeiters, who, being Jewish, duly found themselves in concentration camps. Among them are two played by Karl Markovics and August Diehl. The former is pragmatic when offered relief from camp horrors; the latter increasingly equivocal. And why? Their task, with others, is to create and print English currency which, when dropped by air, would not only bankrupt the country but also bolster a failing Germany when banked in Zurich.

All of which is true.

This brings a new angle to - if one can say so - the familar settings, the familar horrors of a camp, which is here filmed in a form of colour which lays an emphasis upon grey. And so, here is a plot which does not turn upon breaking out but the danger of breaking down as they work in suits with a piece of striped pyjamas on the back to remind them whence they came and that they could yet rejoin those from whom they are separated in the camp.

All of which can, does, make the viewer feel awkward. Here are we, perhaps with a glass of beer in hand, watching something which, to succeed, as it does, has an element of entertainment - what will happen next? - about it. And, at the same time, one asks: on which flank of our side would one have been? Pragmatic or principled?

In fact, it is all the more grey than that. Among other things, the film is a reminder that English notes were once far larger than now, so much so that, rather than squeeze them into a wallet, those lucky enough to have a few of them would pin them together and fold them into a pocket. A convincing forgery needed those pin-holes.

There is a further twist to that tale, not apparent from the film itself, but revealed in an extra on the DVD: a fascinating interview with one of the troubled forgers - Adolf Burger - upon whose memoirs (The Devil's Workshop) it is based. Say no more here, but he had a hunch the notes could not be used.

Time and again, the film turns on trust (can they rely upon the reassurance of the genial, happily-married German officer?), and indeed currency requires trust (as do the art works which command millions). It can all so easily go wrong, as Germans had found when pushing pramloads of dosch to buy a few groceries. What indeed, in recent years, was quantative easing but something similar? And now, in England, we find a Government which has realised it can no longer deny people money but has to accord them - by digital means - a measure of it if the country is not to collapse.

And so, of course, we are in times when hackers are the new gelignite gangs.