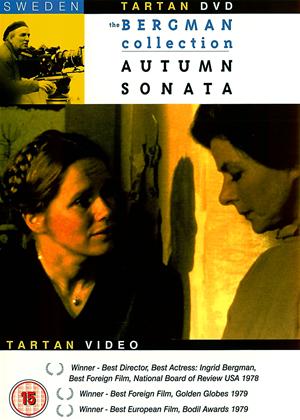 Synopsis:
After a prolonged period of separation, world famous pianist Charlotte (Ingrid Bergman) decides to visit her daughter, Eva (Liv Ullman). Once there, she is surprised to find that her other daughter, Helena, is no longer staying at the mental institution where Charlotte placed her, but is now living with Eva. As day moves into night, mother and daughter open up about their feelings and misgivings toward one another. Before long, Charlotte, who chose her musical career over fulfilling her role as a mother, is forced to reappraise her life and the choices she has made. By the time the night is over, the relationship between these two women undergoes a profound change.
Winner of a host of international awards, this stunning and beautifully observed film features an historic union of two of Sweden's greatest international talents, Ingrid Bergman and Ingmar Bergman, working together for the first and only time.
Actors:
Ingrid Bergman, Liv Ullmann, Lena Nyman, Halvar Björk, Marianne Aminoff, Arne Bang-Hansen, Gunnar Björnstrand, Erland Josephson, Georg Løkkeberg, Mimi Pollak, Linn Ullmann, Eva von Hanno, Knut Wigert
Directors:
Ingmar Bergman
Writers:
Ingmar Bergman
Aka:
Hostsonaten
Studio:
Tartan
Genres:
Drama
Countries:
Sweden, Drama

Fantastic - Autumn Sonata review by ME

This film is a real gem, with memorable acting from Ingrid Bergman in her last film role. It features wonderful fphotography and a deep examination of a fraught mother daughter relationship. It stayed with me a long time and made me reflect how much shallow acting I had seen recently

The Food Of Love. - Autumn Sonata review by NC

For a long time Ingmar Bergman was number one on my list of overrated directors. Today, that mantle has passed to Tarkovsky, but even so, after watching 'Autumn Sonata', my first Bergman in many years, all the impatience and irritation I found in his works came flooding back. Too intense, too introspective. As misery piles on misery, with no character able to find the means of lightening their own mental darkness, indeed no character appearing to try to do so, there is always the danger (which is far from avoided) of judging them simply as weak-willed, and so sympathy begins to ebb.

I take nothing away from the atmosphere Bergman manages to engineer between mother and daughter. The skill at gradually dilineating how the relationship has always been could surely never be bettered. Charlotte (mother) has not seen daughter Eva for seven years, but has no sooner stepped into her house then she is rambling on about her own unhappy recent history. When Charlotte wants to go for a walk, and Eva wants to stay in, there is only one outcome. What has always come first for Charlotte is encapsulated in a phone call from her agent. Even though we later discover that she has more money than she knows how to spend, she still accepts concert dates when she's supposed to be free, because "How much do they pay, did you say?" Recriminations from Eva start slowly, almost in an undertone, but grow like a boil, until a final, irreparable outburst: "People like you are lethal - you should be locked up and made harmless".

The trademark Bergman close-up of faces is a further instance of his work I've found hard to appreciate. Too intimate when a bit of distance and perspective would help. In 'Autumn Sonata' though, it works. Shortly after Charlotte arrives, Eva plays a Chopin prelude for her. Nerves, (this failiure of a daughter playing for her great concert-pianist mother), make her play badly. As Charlotte demonstrates how it should be done, the camera concentrates on Eva's face, and all the memories of how life has been all about, and only about Charlotte, is reflected in one incredibly plaintive image. There are more moments when the face of both mother and daughter demonstrate how deep the knife of memory has cut. All of that is superbly done, and people who have had an intense relationship with their parents, both good and bad, or whose life has been affected by their upbringing, will relate strongly to much of the film.

But a lot of what we learn about Charlotte and Eva is related to us via a character talking to the camera, or a letter being read, or, worst of all, by Charlotte talking to herself. It's a cop-out, pure and simple. Show us, Ingmar, don't tell us. And in the end, sheer unrelenting gloom takes its toll. Not content with the lingering torment of childhood memories, we have to have a drowned child, a deliberately wrecked relationship, an abortion, the recent death of a close friend, back pain, another daughter who is severly handicapped, thoughts of suicide. Good grief, ENOUGH ALREADY! Music has certainly not been the food of love in this family.

As a film, because of the negatives, 'Autumn Sonata' cannot be worth more than three stars. There is an extra one however, because of Ingrid Bergman and Liv Ullmann. It wouldn't be too far from the truth to say you'll never see better acting. Ullmann as the weak one, lets emotions ravage her face, whilst Bergman, the strong one, strains every sinew to hold back the turmoil. Absolutely magnificent.