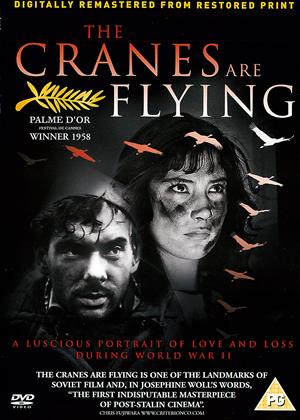 Reviews (5) of The Cranes Are Flying

This is one of those films which stop the breath, make the hair tingle, and leave you powerless to move for an age after the last credit. So many scenes are worth a paean of glorious praise, but a woman's frantic ascent up a circular staircase of a bombed-out building, no walls around her, just the exterior wreckage of the air raid receding as she rushes higher and higher, only to reach a door and open it onto empty space, a clock hanging by a projecting piece of masonry, still ticking, has to rank as one of the most perfect pieces of cinema I've ever seen.

The story is hardly original: war separates two sweethearts, but Kalatozov hardly lets a few minutes go by before feasting the eyes with another sequence. The crowd scenes must be some of the greatest ever filmed. The script, too, is beautifully poignant - a good few classes above the usual weepie.

Tatyana Samoylova is a marvel. Flawless at being happy, sad, expectant, angry, distraught, numb - a screen performance to stand with the highest. There are fine showings by everybody else.

A timeless classic then, one which comes to mind when making a list of the best films ever made.

A magnificent cornerstone of European cinema. - The Cranes Are Flying review by TE

This is an extraordinary work of art, a beautifully constructed film-poem.

The themes are understandably influenced by the Russian experience of the Second World War, but the central importance of peace is thrillingly evoked at the end.

The events and the imagery are symmetrically arranged and the b/w photography is stunning throughout. Every frame could be frozen and presented as a balanced artwork.

The air of melodrama (witness the incredible air raid / sex scene around 40 minutes in) is very much of its time, but the sheer beauty of the images carries the viewer along.

Russian Romance - The Cranes Are Flying review by NO

Moving Film About World War II from an unexpected perspective. - The Cranes Are Flying review by JH

A fascinating film about World War Two, or The Great Patriotic War, from a Soviet perspective. The story is a bit cramped by the constraints of socialist realism -- there are very obvious positive and negative heroes -- but it depicts movingly the lives of people back home. It focuses on the experiences of women in the war, and the suffering and grief felt throughout society, rather than masculine heroics.

Chekhov under Fire - The Cranes Are Flying review by CH

This 1957 film's title denotes the V-shaped flight by a flock of birds on their way to another life. It could equally apply to the very filming of this by Mikhail Kalatozov who animates a simple tale by much use of overhead cameras. Here, in the brief political spring after Stalin's death, he was able to fashion something poetic – from Viktor Rozov's play – about Moscow in the war rather than merely trumpeting the glories of the Fatherland.

The young Tatyana Samoylova is to be married to Aleksey Batalova. Theirs is a joyful romance which finds him rushing up a curving staircase to be with her. The camera is forever moving in these ninety minutes. Indeed, the cameras. Events are seen from many angles, sometimes with scenes superimposed upon each other in the reverie of memory.

And memory is the dominating force. All too soon, before any nuptials, the Pact has broken down, Russia and Germany are at war, and he is called away to serve at the Front. Typical of Kalatozov's blending of the crowd and the personal is her rushing to be there to see him off at the railway station. Heartache, on all sides, is palpable.

The way in which events turn out is typical of life for many – around the world – in wartime. Loneliness, anxiety, treachery. To say any more of the plot would reduce it to the nuts and bolts of tank; is is far more smoothly done than that. An air raid or a woodland death with a last glimpse of trees, is caught in an ever-swirling manner, in quest of a still centre amidst tumult: in effect, a drowning scene above ground.

Acclaimed at the time, a prize-winner in Cannes, sixty-four years on the film is as fresh as ever. How well is it known now? Nobody should miss this, as if Chekhov had lived decades longer into a very different world and caught it as exactly as he always did.