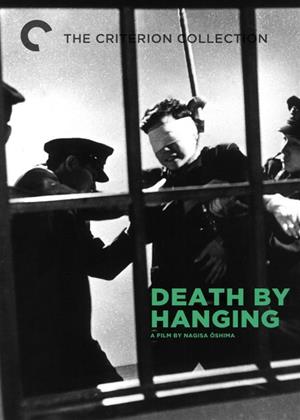 Synopsis:
This sad tale, based on a true story of a Japanese-born Korean student who raped and killed two girls in 1958 and was then hanged in 1963 when he reached maturity, is turned by director Nagisa Oshima into a black farce reminiscent of the darkly satirical, anti-authoritarian films of Luis Buñuel. The film opens with the hanging of the criminal, but the noose fails to kill him. Instead he gets amnesia, and the executioners and officials reenact the crime, hoping to jog his memory and prove that he is guilty. Soon they begin to identify with their roles, and the line blurs between the crime and its reenactment.
The film ends as a bitter indictment of Japanese nationalism, capital punishment, and Japanese institutional prejudice against Koreans.
Actors:
Kei Satô, Fumio Watanabe, Toshirô Ishidô, Masao Adachi, Rokkô Toura, Hôsei Komatsu, Masao Matsuda, Akiko Koyama, Do-yun Yu, Shizuo Satô, Takashi Ueno, Masayuki Hoshi, Yuki Osaka, Daiji Ozeki, Keiko Sakurai, Kurumi Suzuki, Akiko Terayima, Takao Usui
Directors:
Nagisa Ôshima
Narrated By:
Nagisa Ôshima
Writers:
Michinori Fukao, Mamoru Sasaki
Aka:
Kôshikei
Genres:
Comedy, Drama
Countries:
Japan, Comedy, Drama

Sign up
Baby Cart in the Land of Demons

Sign up
Hanzo the Razor: Who's Got the Gold?

Reviews (1) of Death by Hanging

Story Condemned To Death. - Death by Hanging review by NC

The problem with farces (for me, anyway) is that the spectacle of watching grown people acting like kids with high sugar levels in their bloodstreams wears a bit thin pretty quickly.

'Death By Hanging' is obviously very far from the Aldwych variety - not a glimpse of Brian Rix caught with his pants down behind a bedroom door. This is much more in the Dario Fo mode, getting the message across by knocking seven bells out of an authority which regards people from another country as inferior, and which has nonsensical rules about who they can or cannot hang. Oshima also cleverly adds interest by gradually opening out the mise-en-scene, first by the inclusion of a few props around a previously bare execution chamber to suggest a room where the condemned man used to live, then by a sudden eruption into the outside world.

Fo's 'Accidental Death Of An Anarchist' works because at just over an hour it doesn't outstay its welcome. Joe Orton's plays (the execrable film version of 'Entertaining Mr. Sloane' notwithstanding) work because of a relentless invention of plot and dialogue. 'Death By Hanging' has neither brevity nor a script which constantly appeals.

Then, for the last half-hour, the film changes tack completely. While the authority figures get boringly drunk, the condemned man and his 'sister' (he may not have had an actual sister; also the same actress plays one of his murder victims) philosophise endlessly about identity. You know a film isn't ticking the boxes when you keep looking at the clock.

The message is sound, the idea is good, the execution is left hanging.