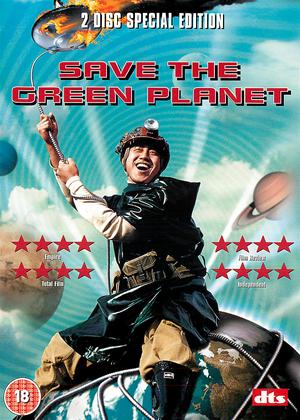 Synopsis:
Byung-Gu is an ordinary young man. He believes that all of the earth's social ills are the result of evil doings of aliens. That's why he knows that, unless he can meet the prince from Andromeda before the total lunar eclipse, planet Earth will be destroyed. However, to meet the prince, he must find an extraterrestrial representative living on earth. So he kidnaps the most logical suspect; the boss of a multi-national company and thus begins a battle of wills between himself, who's trying to uncover the secret alien plot to destroy Earth, and the boss, who thinks Byung-Gu is nuts and tries desperately to escape.
With only four hours until the lunar eclipse, will time run out for planet Earth? Can Byung-Gu single-handedly save the green planet? Possibly the only film that can be said to be a combination of Close Encounters of the Third Kind and Red Dragon...
Actors:
Ha-kyun Shin, Yun-shik Baek, Jeong-min Hwang, Jae-yong Lee, Ju-hyeon Lee, Ju-bong Gi, Dong-hyeon Kim, Roe-ha Kim, Mu-hyeon Lee, Adolf Hitler
Directors:
Joon-Hwan Jang
Producers:
Tcha Sung-Jai
Writers:
Joon-Hwan Jang
Aka:
Jigureul Jikyeora!
Studio:
Tartan Asia Extreme
Genres:
Comedy, Sci-Fi & Fantasy
Countries:
Korea, Comedy, Sci-Fi & Fantasy

Reviews (2) of Save the Green Planet

An inventive and demented work of genius. - Save the Green Planet review by CP Customer

When a drugged up, factory worker, part time bee-keeper and all round crackpot named Byeong-gu researches the background of a powerful Korean industrialist called Kang he can draw only one conclusion, Kang is an alien from Andromeda who plans on taking control of Earth on the next lunar eclipse. Byeong-gu then does what any self respecting paranoid, drug addled lunatic would do, kidnap the man, tie him up in his basement, and torture the truth out of him. In between his quest to get the truth out of Kang, he robs banks to take care of his comatose mother, cares for his bees and builds mannequins, and if all that isn't weird enough, the tone of the film wildly changes direction from surreal comedy, to extreme violence to edge of the seat suspense, alternating as quickly and disorientating as possible, and as strange as it seems it all works very well. It's not a perfect film by any means, but the truth is that it's so inventive and original you'll forgive its shortcomings, and not since Stephen Chow's superb 'Kung Fu Hustle' have I seen so many genres crammed into one film. Be warned though, this is not a film for the squeamish; the torture scenes which take up a large bulk of the film are horrific, plentiful, and realistic. If you can stomach the scenes of torture and gore, and enjoy something out of the ordinary then 'Save The Green Planet' is great fun. Looking forward to what director Jun-hwan Jeong comes up with next!

A tribute too far - Save the Green Planet review by Kurtz

One of the things I usually love about South Korean films is that the directors have all seen lots of American movies so whilst the culture and language are very different, many of the situations in their films are familiar and some scenes are clearly affectionate tributes to Hollywood hits. Director Jang Jun-hwan simply can’t decide which movie reference to jam in next in this film and it despite the manic energy of his cast, “Save the Green Planet” ends up feeling a bit empty and derivative. Take your pick from “Saw”, “The X-Files”, any bungling kidnapper movie, any washed-up cop movie- they’re all in there- throw in a frankly risible Star Trek-type ending and it’s disappointment all round.