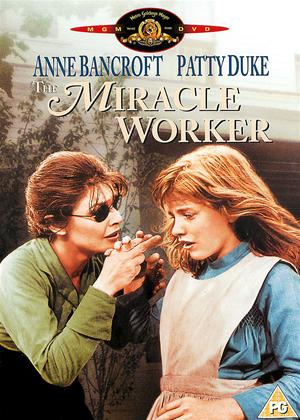 Reviews (3) of The Miracle Worker

A Terrible Isolation - The Miracle Worker review by MW

Patty Duke gives an extraordinary performance as the feral blind and deaf Helen Keller crashing around the house and garden with arms outstretched desperate to communicate with the outside world. Anne Bancroft is equally brilliant as her inspired and devoted tutor who endures countless violent tantrums in her dogged determination to connect with her isolated and frustrated pupil. It's a life-affirming story which largely eschews sentimentality.

A Gritty Portrayal - The Miracle Worker review by CP Customer

This film was made when real life could be portrayed without a strong dose of sentimentality. I had not seen this film since I was quite young and I am so glad I decided to watch it again now.

There are some long scenes which reflect the suffering of Helen and the determination of Annie. They are harrowing yet they really take the viewer on this difficult journey.

I defy anyone who does not shed a tear in the end, the love and gratitude showed to the teacher by the pupil in the final scene is touching and real.

Adaptation by William Gibson of his own stage play which re-employed its two wonderful leads: Anne Bancroft as Annie Sullivan, the educator of the deaf-blind and near mute seven year old Helen Keller played by the child actor Patty Duke. Sullivan teaches the wild, unreachable child to communicate with the world through applying pressure to her teacher's fingers. Keller (1880-1968) went on to earn a degree from Harvard and became a political activist and lecturer.

Sullivan went to live with Keller's family in Alabama, 1887, with the South still snagged on the aftermath the Civil War. Arthur Penn frames the story and its characters in the terms of the kind of heroism normally seen in war films or epics. And that feels appropriate. Sullivan's brave and astonishing achievement is an act of phenomenal audacity even though achieved in a domestic context.

The historic events of the story are presented in the style of expressionism, with noirish lighting and distorted visuals. Sullivan with her pale, traumatised face, her own near blindness hidden behind black glasses looks like a visitation from a horror film. This is Southern Gothic. She is haunted by her own agonising past in a Victorian asylum, tortured with guilt for the handicapped brother she left behind and who died there  in misery.

Penn creates a wonderfully atmospheric and emotional environment for his actors, but it is Bancroft and Duke you really remember, locked into their confrontation in their anguished, intimate world of the troubled mind. There are long scenes of little or no dialogue, with no scoring and little editing. The Miracle Worker looks artistic, but feels very real. Experiencing the film is a transforming and humbling experience.