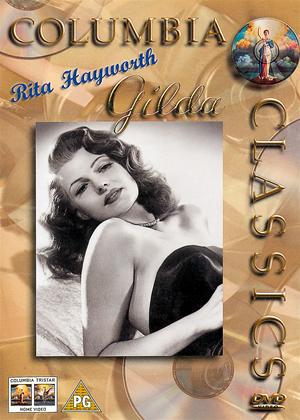 Gilda is barely a crime film at all. There's a death related to a subplot about post-WWII fascists seeking a tungsten monopoly, and its leader is killed at the end in self defence. The film is a romantic melodrama but its visual art and the dialogue dense with pessimistic innuendo makes it very noir. As do its fascinating, damaged, emotionally diseased heroes, Johnny Farrell (Glenn Ford) and the unforgettable Gilda (Rita Hayworth).

They are introduced indelibly: Ford throwing his crooked dice into the camera's gaze, fringe swinging over his glowing, saturnine face; Gilda tossing her hair, rising up into the frame from the bed ('Are you decent Gilda? Who, me?'). They have torn each other apart, and burned out before the film even starts, only for Johnny's new boss to unwittingly bring her back as his wife.

Glenn Ford is great, underplaying as an ambitious gambler who makes his own luck. But Rita Hayworth is a sensation in one of the great star performances of the decade as the sexy, epigrammatic, superstitious Gilda. Her look would become a model of forties glamour, her handling of the fatalistic dialogue is sublime, but best of all are two stunning musical numbers, Amado Mio, and Put the Blame On Mame, where her legendary strip (she takes her gloves off!) damn near stops the film.

There is fine support from George Macready as the dangerous casino owner/Gilda's husband, with plans for a second act for the Nazis. The portrayal of a malignant sexual pathology is overwhelming. Gilda says it best: 'I hate you so much I would destroy myself to take you down with me'.

I am so glad that Cinema Paradiso exists. Members can enjoy films from different eras and it good to be reminded of screen magnets like Rita Hayworth. I don't honestly think that overall this film is great but it is absolutely carried by the extremely glamourous Rita Hayworth. A true star!