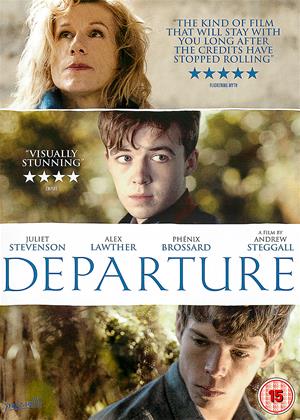 Synopsis:
Beatrice (Juliet Stevenson) and her teenage son Elliot (Alex Lawther) spend a week packing up the contents of their remote holiday house in the South of France. Fifteen-year-old Elliot struggles with his sexuality and she in turn is confronted by the realisation that her marriage is coming to an end. When an enigmatic local teenager, Clément (Phénix Brossard) enters their lives, both mother and son are compelled to confront their desires and finally, each other. "Departure" is an intimate story beginning at dawn on the first day and ending at night on the sixth day, charting the end of a summer, the end of a childhood and the end of an otherwise nuclear, middleclass family.
Actors:
Juliet Stevenson, Alex Lawther, Phénix Brossard, Finbar Lynch, Niamh Cusack, Patrice Juiff, Frederic Arsenault, Mathilde Arsenault, Danièle Catala, Guillaume Tobo
Directors:
Andrew Steggall
Producers:
Pietro Greppi, Cora Palfrey, Guillaume Tobo
Writers:
Andrew Steggall
Studio:
Peccadillo Pictures
Genres:
British Films, Drama, Lesbian & Gay, Romance
Countries:
UK

Full of depth and intimacy - Departure review by TD

This is one of the best films I've seen in a while. The imagery with its sense of place, pastel shades, reflections and views through glass are faultless. The characters are fascinating: the none-too-likeable Elliot (up himself in so many ways!) who is utterly convincing; the uber-cool yet enigmatic Clement; the tortured mother Beatrice, and not least a superb bit-part performance from Patrice Juiff as the barman near the beginning. As a whole it's deep, intimate and not a little funny, especially as the two boys struggle with each other's first language.

If you're open to exploring LGBT issues in a movie, I think you'd enjoy this.

This is a great film. More European than American with subtle, understated dialogue and really good performances from the cast. Needs to be watched at least twice and every time you see more little details in it. Beautiful to look at too with a slow pace that enables you to take everything in including the scenery.

One thing I will say is this is preferable to the over-rated CALL ME BY MY NAME which inexplicably won an Oscar.

However, it's all SO predictable - I knew how the plot would end in the first few minutes. Far too many scenes of mummy moping around feeling sorry for herself!

Rather irritated too by he posh, rich, spoilt, second home owning Juliet Stephenson mother character. Didn't believe the subplot re the father either. And the teen boy is rather spoilt too!

All perhaps a bit of a romantic fantasy film. The classic of that teen boy love genre is probably ANOTHER COUNTRY from 1983.

In a moment of weakness.... - Departure review by RG

...I decided I should up the intellectual content of my list. This pretentious load of rubbish made me go back and remove all of said films.