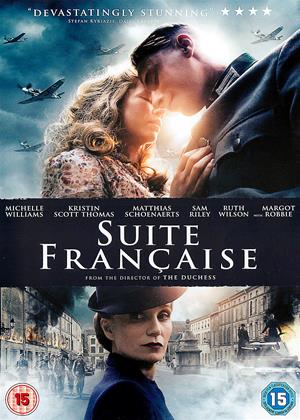 Beautifully photographed wartime romance, set in a version of France where everyone speaks English - Suite Francaise review by RP

It's a wartime romance with added Germans. Err, that's it.

What makes this different from so many similar films are a number of factors:

- it's set in France, in a small town occupied by the Germans

- the central character falls for a German officer

- the story of how the book came to be written is quite moving. Look it up on Wikipedia.

The central character is played by Michelle Williams who I found too wimpish for the role. Better is Matthias Schoenaerts who plays the German officer - and composer! - she falls for, but best is the always excellent Kristin Scott Thomas as the dominating mother-in-law.

The film is beautifully photographed, the Germans are not just portrayed as black-and-white caricatures and Matthias Schoenaerts' character is cultured but knows his duty - and (of course) ignores it at the so predictable end.

However, I disliked intensely the decision to have the dialogue in English. Yes, the Germans spoke German - but the French spoke perfect English. The film would have worked far better made as a French film, in French. Not only that, but Kristin Scott Thomas speaks the language fluently, having lived there since she was 19.

No bad, just average - but could have been so much better. 3/5 stars.

Mills and Boon with Swastikas - Suite Francaise review by PV

This is basically a writing-by-numbers soppy Mills-and-Boon style girlie fantasy romance, similar to the millions written that millions of women read to escape their dull lives.

It has all the bits: handsome male hero, tick; unhappy pretty young woman who falls in love with her knight in shining armour, tick; disapproval (as in all soapy melodramas) from the family - or, more specifically, a seemingly wicked mother-in-law - tick.

If you want to watch a real quality WWII film series from a German soldier's point of view, then watch 'Generation War - Our Mothers, Our Fathers.'

BUT the story of how the book was written - or actually part-written (because the woman who wrote it was dragged off to a concentration camp and killed before she completed it) is fascinating. Dare I say it but without that story - and the discovery and then publication of this 60 years after the war - then this film would never have been made.

Anyway, it's all watchable if you like that sort of thing.

And I had no objections whatsoever to the director's decision to have the Germans speaking German and accented English, but the French speaking fluent English. This is standard practice in drama and theatre. If the French had been speaking French with accents and the Germans too, it could have been more Allo Allo than Mills and Boon, after all...

OK, I'll admit that I rented this just to see Michelle Williams, but my goodness, it is tense and doesn't take any prisoners! Margot Robbie is unrecognisable one of the village underdogs, and the village itself looks very real (helped by the fact that it wasn't a set but a real place!) I'm grateful for the English dialogue (can't stand subtitles) and that it wasn't greyscale (but it was shot on film - I usually prefer sharper digital capture but the film grain does seem to suit the look of this movie). In summary, a great slice of village life during WW2 in France.

The book was absolutely brilliant. - Suite Francaise review by SM

...........but the film was less than average, and misses the whole feel of the book, which was brilliantly written, engaging, and hard to put down.

This is a deceptively inconsequential little film that sneaks up on you until it grips. In the wrong hands, understated acting and precise direction can render the most exciting story bland, but here it serves to ramp up the tension. Director Saul Dibb sets a perfect tone and leads Matthias Schoenaerts and Michelle Williams (never better) are equally perfect as the German officer and the Frenchwoman (with a faultless English accent!) with whom he is billeted.

This may not be the first film to explore star-crossed relationships in wartime but it's a riveting addition to the genre. Shot entirely on location in France and Belgium, it is a beautiful, subtle, elegant film that has a cinematic aesthetic unusual for a director from a documentary background. Adding to its authenticity is the fact that the story was written at the time, in the 1940s. If the title means nothing to you, it certainly will after the poignant climax and end-titles.

Very well directed film with excellent photography. Well acted by all. Only query is on the language used - agree with reviewer above - it would have been better as a French film