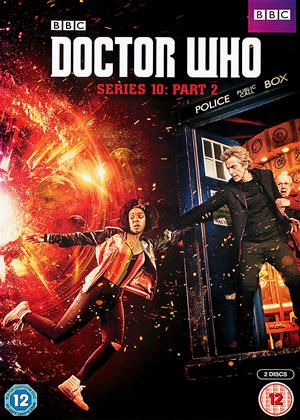 Sign up
Doctor Who: The Day of the Doctor

Sign up
Doctor Who: The Time of the Doctor and Other Eleventh Doctor Christmas Specials

Sign up
Doctor Who: The Husbands of River Song

As the Peter Capaldi age of Doctor Who draws to a close, there’s less of a tragic sensation of saying goodbye and more of a lingering weariness. The show was clearly running out of steam as confounding adventure prospects continued to swirl and confuse the timeline in a manner more maddening than whimsical. This age of Doctor Who was going long in the tooth and this last section is a somewhat painful extraction.

Capaldi’s portrayal is still fun but a lot of his vicious grit and wit, though it’s wearing thin in a less meaty and messier plot. Part of when you know a series is on its last legs is when it starts resorting to reaping from its past in a manner more for showcase than intrigue. Consider the finale of this series where the Doctor isn’t ready to regenerate and through sheer will delays the clock so that he can meet with the First Doctor. You remember William Hartnell’s Doctor, right? He’s only been dead for decades but seems to keep coming up during the Capaldi arc as some sort of neverending palindrome in an infinite series of false endings. We’ve seen the Harnell Doctor in previous installments but usually in the form of reunion specials that were more like lackluster asides than true Doctor Who stories considering how warped they were with staging. In Series 10, not bound by cameo logic, this reunion of sorts comes off as...odd.

The series certainly presents enough weird scenarios to be fitting of Who, more classically than within the greater appeal of the new series. The Doctor is brainwashed at one point into working with the Monks and within a University, which is neat if it weren’t used as quick aside for the last batch of episodes. Victorian soldiers are found on Mars in the 1880s. A creature is encountered in 2nd century Scotland. Troubling morals are revealed of Missy and there’s a messy arc of determining who Bill really is in the grand scheme of things.

All of these aspects seems typical but in a manner of keeping the slate relatively clean and open for an ending that leaves more lingering for whatever the next showrunners will come up with. Similar to the Tennent run, this series comes crashing down into its final inning with more of the same than anything all that riveting we haven’t seen in series priors. Many of the dramatic stings seem far too familiar and with few shocking twists to keep audiences compelled past the level of a soap opera level of expectations. Even the presence of the Doctor during the famous Christmas Truce of World War 1 carries less of an observant or even thematic inclusion; it’s just sort of there while all the confusion of an additional Doctor and more villains convolute the story to a degree I’ve only seen comic books muster to such a degree.

The Capaldi era was certainly an intriguing one but I feel like it’s one more admirable for the ingredients than the writing. In this manner, I admire the era, in the same way, I took to the Sylvester McCoy arc; not the best writing but a damn good Doctor. And, of course, he was my first so there’s that aspect as well. There’s no doubt going to be plenty of admirers of Doctor Who on this level for him being their Doctor. But of all the series for Capaldi, this is certainly his weakest as he exits the door. Let’s hope the next group of fresh faces behind and in front of the camera can breathe some new life into this long-running show.