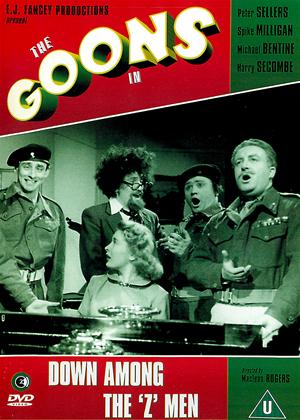 Rent other films like Down Among the Z Men

Reviews (2) of Down Among the Z Men

Very dated 'Goons' film, worth watching for old ENSA routines + 20-something Goons. - Down Among the Z Men review by PV

This is a mercifully short film of just over an hour, and that's even padded out a lot be dancing girls doing very un-pc routines and a couple of songs.

The plot is like something out of a 30s B-movie and the acting wooden.

Harry Secombe does a lot of pratfalls.

Michael Bentine plays a Charlie-Chaplin-bow-legged mad professor. But he does a wonderfully imaginative routine with a piece of wood prop on stage in a play showing us just what he would have done in ENSA.

Spike Milligan plays his thicko character with a nasal voice.

Peter Sellars plays an officer toff - JUST the same character he plays to perfection in Kubrick's Dr Strangelove (based on a 'straight' novel by a Welsh writer incidentally). he also does American GI voices wonderfully in a stage routine - again, just what he would have done during the war in ENSA. The man was such a marvellous mimic and he was only 26 or so here - yet looks over 40.

A curiosity really, but a must-see for all fans of comedy and its history, especially British comedy - you can see its roots in musical hall clearly here.

I feel a bit mean giving one star to the only feature film the Goons ever made, but watching it makes it pretty clear why, although their radio show would continue to increase in popularity for almost a decade, they never attempted to make another full-length movie. The lightning-paced anarchy of the Goon Show is replaced by a leaden plot involving spies trying to steal a secret formula which isn't the least bit funny, and meanders all over the place before being tied up in the last three minutes with a bit of clumsy slapstick, one of the few times the film gets at all lively.

Harry Secombe, who is obviously ill at ease in front of the camera, has to deliver a constant stream of very feeble puns, many of which rely on the desperately contrived plot device that he recently played a policeman called "Bats" in a totally irrelevant play which we don't actually see. Spike Milligan plays Eccles, a character who works on the radio because we imagine him to be a bizarre creature similar to a good-natured Bigfoot, but on film is simply Spike Milligan doing a silly voice while pulling a goofy face. Peter Sellers plays an early version of Major Bloodnok who has yet to develop any of the outrageous personality traits that made him entertaining and is almost a straight man, except when contrived excuses are found to have him behave out of character, so, despite giving by far the best performance in the movie, he's not all that funny. And Michael Bentine, who quit the team just after they made this film (or was kicked out, depending on who's telling the story), is embarrassingly dreadful as a mad scientist who you may just possibly find quite amusing if you're five years old.

Along the way, subplots such as Secombe being wanted by the police for a totally uninteresting reason fail to go anywhere, romance gets in the way of what comedy there is, very dated song and dance numbers slow things down still further, and towards the end a concert is staged because the scriptwriters couldn't think of any other way to allow Sellers to briefly demonstrate the extraordinary talent for playing multiple rôles which he should have employed throughout the film, or for Bentine to do something less desperately unfunny than the rest of his performance for a couple of minutes. If you're writing a biography of Harry Secombe, or a history of British comedy, or something along those lines, you should probably watch this movie. But if you want to be entertained by the Goons for an hour, you should definitely listen to any two episodes of "The Goon Show" instead.