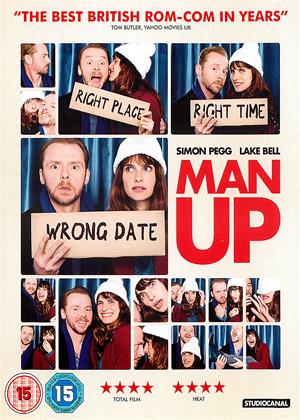 Synopsis:
Heart-warming comedy about taking chances and rolling with the consequences. One night, two people, on a first date like no other... Meet Nancy (Lake Bell): 34, single, hung-over, and exhausted by her well-meaning but clueless friends' continual matchmaking. Nancy is done with dating. She's reached the end of her rope, and is more than happy to hole up, seal up, and resign herself to a life alone. That is until Jack (Simon Pegg) mistakes Nancy for his blind date at Waterloo Station, and she does the unthinkable and just... goes with it.
Because what if pretending to be someone else finally makes her man up, and become her painfully honest, awesomely unconventional, and slightly unstable true self?
Actors:
Simon Pegg, Lake Bell, Dean-Charles Chapman, Rory Kinnear, Olivia Williams, Ophelia Lovibond, Sharon Horgan, Ken Stott, Henry Lloyd-Hughes, Stephen Campbell Moore, Harriet Walter, Lasco Atkins, Paulina Boneva, Paul Thornley, Shina Shihoko Nagai, Susan Fordham, Phoebe Waller-Bridge, Joanne Manchester, Joanna Finata, Robert Wilfort
Directors:
Ben Palmer
Producers:
James Biddle, Nira Park, Rachael Prior
Writers:
Tess Morris
Studio:
StudioCanal
Genres:
British Films, Comedy, Romance
Countries:
UK

Unavailable
Hector and the Search for Happiness

Romantic Comedy for everyone - Man Up review by JD

Although this contains all the essential elements of romantic comedy, it has a wider appeal. The comedy is just funnier. Lake Bell is impressive. Her English accent is perfect. There is some good chemistry with Pegg who of course is likeable and funny. The last 10 minutes for me were disastrous. 75 minutes of well paced well written plot and then utter utter rubbish. Maybe they tried to compress the end too much, maybe they ran out of time/money/ideas. Leaves you thinking it wasn't that good after all.

An enjoyable film which is funny and different. Even my husband really enjoyed it, and he usually hates this sort of film.

Romantic comedies all seem to follow the same script formula. Two people meet, they flirt, they fight and rush into each other’s arms by the end. What keeps the audience coming back are the characters present. Man Up is another romantic comedy that adheres quite closely to the old format. It’s a predictable bit of comedy for two people in their 30’s struggling to not be alone. If it had starred some generic leads, it would be just another bland example of the genre. Thankfully, the casting of Simon Pegg and Lake Bell amp up could have been a lackluster picture.

Lake Bell plays Nancy as a woman in her mid-30’s who finds herself being anti-social amid her far more social family. She’s tried blind dates, but they always end in disaster. Aside from her inappropriate remarks here and there, Nancy has her unique charms as woman obsessed with movies. She loves quoting the likes of Silence of the Lambs and Wall Street on a daily basis. How could you not dig a woman like that? Nancy’s only shortcoming is that she really doesn’t have much faith in herself to get out there and meet people. While on the way to her parents’ wedding anniversary, she gets a swift kick in the right direction when her traveling companion on the train gives her a self-help book. She hates the book, but her carrying it through a terminal leads to a chance encounter with the perfect guy.

The handsome and quick-witted Jack (Simon Pegg) mistakes Nancy for his blind date carrying a self-help book. Due to his fast talking and ease with movie references, Nancy finds herself going along with pretending to be his blind date. Of course, her whopper will eventually catch up with her, but not before she discovers a few lies from Jack. Specifically, he hasn’t yet been able to divorce his wife which naturally leads to an awkward double date scenario. Bars are hopped, jokes are cracked, arguments erupt and it all leads to the expected running towards their true love.

Several of the cliches for the genre are present, but surprisingly have a spark of energy and chemistry to make them appear fresh. The banter between Bell and Pegg is a pleasure to the ears the way they both walk the line of fear and pleasure. They hit it off quite well upon first meeting the way they connect with movie quotes and familiar social situations as though they had known each for years. There’s a vested interest to see these two end up together that many of the expected obstacles carry some weight and substance to what’s at stake. The charisma of the leads makes the usually tired mad dash across town with the whole world watching a tad more entertaining than formulaic.

There’s even one element the could’ve derailed this romantic comedy entirely when Nancy runs into Sean, her creepy stalker friend from school. Sean appears as a perverted cupid the way he talks to both Nancy and Jack while clothed or unclothed. His insertion as the comic relief could have drug Man Up into a dark place of easy and disgusting jokes, but Sean is pulled back just enough to fulfill his part and not steer the picture into a juvenile creek. The romance and comedy is kept on track by focusing entirely on Nancy and Jack with side characters acting more as support than comedic detours.

I was surprised by how much Man Up won me over with it strong emphasis on the chemistry of Lake Bell and Simon Pegg. The romantic comedy genre has rarely been a genre I look forward to viewing in how these pictures seem to have settled into a cozy and tired formula. But the genuine charisma emitted off screen has revived a little bit of that charming whimsy that has grown stale with age. If a movie can make me root for the leads after the overused kissing scene where strangers cheer them on, it’s done something right.