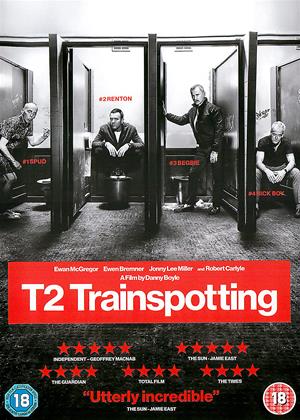 Far better than it had any right to be. - T2: Trainspotting review by SW

Lets be honest most sequels are bloody awful. T2 isn't. In fact its a very good film with great performances and expertly directed. There are plot holes everywhere and I didn't really buy it all but it works so well that you can forgive it all. The star is Spud but everyone is great in it and yes the soundtrack is wonderful too! See!

The other half. - T2: Trainspotting review by JG

Whenever a sequel to a film is made the obvious question pops up. "Why make a sequel, is it any better, has it anything to add, or is it just milking the same formula"? This is often answered by "the original was better", though sometimes as in the case of modernizing an old story, or a different director giving a different twist, it does work.

In this case we have the same director revisiting the story twenty years on. It is not so much a sequel, as the second part of the same story. The same actors are used who have all aged twenty years in the meantime, so it works very well. Some clever bits of juxtaposition have been used in the inter cutting of flash backs to emphasize the back plot. The surface plot is a new story (continuing the first one) so it is not just rehashing old ground, which makes the film entertaining and able to stand on its own. It is when you put both together that the back plot of how people inter-react and how culture evolves becomes the more important. In my view these films should be seen together, with a short interval (one or two days) between and are not so much film and sequel, but a whole when seen together. (Blade Runner is supposed to be similar).

This DVD has an interview with most of the main actors and the director which we found interesting and illuminating. One point made was that in watching this film now, if you saw the original when it was released, then you can reflect on how you have changed in the intervening twenty year.

Not the sort of film I usually like, but the acting is great and the sheer bravado of the directing and amazing zany effects and music are worth watching even if you don't like the plot. I was not really a fan of Ewan McGregor before this but I can see why people rate him so highly now. He has a fantastic "speech" just after half way that is almost a parody of other great speeches, but really works.

I was worried I'd be disappointed with this as I really love the original and have seen it many times. T2 is a bit more upbeat that the first, and does make many references and flashbacks to Trainspotting. Yet it manages to maintain interest, and is a pleasantly nostalgic look back for both the characters and the viewer. Plus the characters have grown and changed in their own ways. I was expecting the film to have more similarities with the book sequel, but the writers understandably wrote a mostly original story as I suspect the book was too racy to translate to a mainstream film. Thoroughly recommended for anyone that enjoyed the first film.

Just as bonkers as T1 :) - T2: Trainspotting review by Sapphyr

Like many others, I was concerned that this would not be as good but, I was wrong :) It's daft as before and it's cathartic to see that, apart from thinking 'Fargo'? for part of the time, as always with films, I *love* nostalgic soundtracks and playing 'guess the artist' or, in the vernacular, 'Who the bl**ding, f**ing, f** *is* that?

One of my staff/friends is a wee Scots lassie so I played the T1 soundtrack to death around the office system!

Not a bad film at all, but what’s the point - T2: Trainspotting review by KN

Disappointing sequel to one of the best films I’ve seen in 30 years. The acting, directing are spot on as you would expect but at no time did I feel any improvement on the first film. In fact the highlights are when the original film is referred to. Probably if this was a stand alone film I’d have given a slightly better mark but comparisons are impossible to avoid.

I always thought the original film, TRAINSPOTTING, massively over-rated, often by Scots who felt a patriotic duty to overpraise it. I always disliked the glamour shown connected with hard drug addiction too - which is certainly not funny if you've ever seen addicts, alive or dead, as I have. It all stops being funny then.

This movie I enjoyed far more and Danny Boyle can, as ever, turn a slim idea into a cinematic experience via some clever pop-video type techniques (using real CCTV shoplifting footage, for example) and a kicking soundtrack used well (most film directors are very weak at using music and just tag it on, thinking film is a visual medium and forgetting it is half a SOUND medium, not merely visual, and always was, even in the socalled 'silent' era).

Anyway, I dislike McGregror but he's well cast here as are other actors. The flashbacks will be nostalgic for some, but not me.

Funnily enough the 'Welsh trainspotting' TWIN TOWN also has a sequel soon, to be called 'TIN TOWN', I think.

Most sequels are rubbish; this isn't. I enjoyed it and the soundtrack is unusual and brilliant - I am always glad to be introduced to new music, even if not precisely to my taste.

It’s been twenty years since Ewan McGregor gave his rant about choosing life. Now there’s much more to choose from in the 21st century. There’s social media, streaming video, memes, conspiracy theories, culture wars, news hysteria, etc. There’s so much to choose from that rather than tap into any one of these cultural milestones to push the characters through after twenty years, Danny Boyle’s T2: Trainspotting pigs out by diving face first into a new Edinborough of getting revenge and tripping out. It may never amount to as much as the first film, but still has a fun time in its world both familiar and surreal.

McGregor returns to the role of Mark, returning to Edinburgh after that special life he dreamed about in Amsterdam turned out to be not so special. All his old friends and enemies are still there, waiting to either seek his help or stab him in the back (or both). Spud (Ewen Bremner) still finds himself addicted to heroin, but is desperate to find his way out of this hole for the family he cannot see. Sick Boy (Jonny Lee Miller) now runs a pub, but wants more out of life as he tries to raise enough funds for his own brothel. Mark is more than willing to help both of his childhood friends achieve their goals, hoping he can find a better life on his old stomping grounds. The drugs certainly help at least.

Meanwhile, the crooked Franco (Robert Carlyle) has just escaped from prison and takes aim at getting revenge on the collective that put him in prison. Namely, he wants Mark for deceiving him. Did you forget what Mark did in the previous movie? Don’t worry; the movie will bring this up several times. Did you not even see the first Trainspotting? Don’t worry; there are plenty of scenes lifted from the previous picture to showcase most of the call-backs.

As with other movie sequels set about two decades after their predecessors, this is a very nostalgic film that banks on plenty of familiar scenes. Remember that moment when McGregor plops on the hood of a car mid-chase and smiles at the driver? You’ll see that again. Remember McGregor’s unforgettable opening about what to choose in life? Have some more of that rant. Oh, and we certainly can’t forget the moment where all the boys stand at the train tracks.

Despite the movie’s need to recycle its scenes, there’s a special key to making all this engaging: this is a sequel that acknowledges its own nostalgia. There are several scenes where the characters will start having flashes back to their schoolyard days, remembering a time when they were more innocent and bitter feuds were over more trivial matters. They also don’t shy away from recognizing the darker elements of their past, relating to how nostalgia can refer to that of an old wound. There’s a brilliant moment between Mark and Sick Boy have an argument about the past, bringing up unshakable events of their pasts that shouldn’t be forgotten. After all, it’s a little tough to forget Sick Boy’s infant son dying from neglect and the horrific vision that follows.

While still familiar in its trippy visuals and iconic moments, T2 does feel refreshing for never resting on an easy story. The new scheme of Sick Boy is a clever enough device to pull the characters along, the freaky hallucinations of committing suicide are intoxicating and the general style is still just as fast and experimental as it always was. There are a handful of amazing scenes as when Mark and Sick Boy sing their way out of a bar, Spud envisions his own death and Franco speaks with an accent so thick it’s hilarious to watch the stylish subtitles keep up.

My one major gripe with the picture is that it never felt as though it were touching on some grander aspect of commenting on society the way the first film did. I could sense bubbling underneath the surface of nearly every scene, the way Mark brings up his age and Franco finds himself frustrated with the son who wouldn’t follow him. The moment where Mark starts up his “choose life” rant could have been that moment when the movie finally reaches an epoch of drug culture that has shifted and contorted for a new century of uncertainty. But the scene ends with him casually asking about sex, implying that his rantings are just BS talk in between recreation. Oh well; it’s still a worthy trip, but not as deep as it could have been.