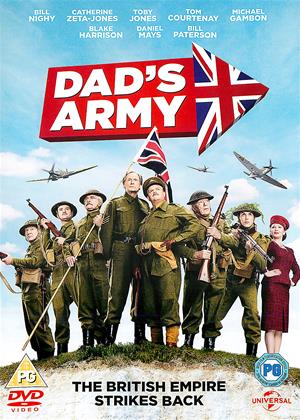 Synopsis:
It is 1944 and World War II is reaching its climax. The Allies are poised to invade France and finally defeat the German army. But in Walmington-on-Sea morale amongst the Home Guard is low. Their new mission then - to patrol the Dover army base - is a great chance to revive spirits and reputation, that is until glamorous journalist Rose Winters arrives to write about their exploits, setting the pulses racing and putting the local women on red alert. MI5 then discover a radio signal sent direct to Berlin from Walmington-on-Sea. There's a spy on the loose! The outcome of the war is suddenly at stake, and it falls to our unlikely heroes to stand up and be counted.
Actors:
Catherine Zeta-Jones, Bill Nighy, Michael Gambon, Toby Jones, Sarah Lancashire, Emily Atack, Tom Courtenay, Mark Gatiss, Blake Harrison, Daniel Mays, Ian Lavender, Frank Williams, Bill Paterson, Alison Steadman, Holli Dempsey, Annette Crosbie, Felicity Montagu, Julia Foster, Martin Savage, Oliver Tobias
Directors:
Oliver Parker
Studio:
Universal Pictures
Genres:
British Films, Comedy
Countries:
UK

Who do you think you are kidding...? - Dad's Army review by Count Otto Black

What, exactly, is the point of this movie? The legendary critic Roger Ebert once said that remakes should only be made of films which had something wrong with them in the first place. "Dad's Army" is generally reckoned to be one of the best sitcoms ever, almost all episodes of which still exist (and can be rented here). And by the way, a movie spinoff was made in 1971, and despite starring the original cast, it was a flop, like so many film adaptations of half-hour sitcoms which don't translate well to the big screen because they were never meant to.

Anyone familiar with the original series (and this movie is riddled with in-jokes you won't get unless you are) will constantly be comparing the performances of the mostly talented cast with the original actors, and they seldom come anywhere close. It's not their fault. Actors who are asked to not only play fictional characters, but to play them as if they're impersonating other actors who played them for a decade but are sadly unavailable because they've died of old age, have their work cut out. Daniel Craig didn't get the rôle of James Bond because of his ability to impersonate Sean Connery fairly well, which he almost certainly can't (they tried that once; two words: George Lazenby). Unfortunately, Toby Jones got the rôle of Captain Mainwaring not because he's a good actor, but because he's a good actor who is physically capable of more or less pretending to be Arthur Lowe pretending to be somebody else.

If you're a fan of the TV show, you'll know something's wrong when the film opens with a totally serious sequence involving Nazi spies in which somebody actually dies. The whole movie has the same problem. Our heroes spend far too long losing every semblance of dignity before becoming truly heroic after all (this kind of thing works better in a 30-minute sitcom episode), and then their moment of glory is too important, because this is a movie, not a sitcom, so they have to win World War Two. Personal backstories that were gradually hinted at over the course of the very long series are brought front and centre at the expense of the actual comedy these absurd characters were designed to provide. Modern tastes are catered for with crudely lavatorial humor inappropriate to the context. And there's a feminist agenda because no modern movie, even if it's set in 1944, is allowed to exist without a nod to Political Correctness. We even see the two surviving members of the original cast shoved in front of the camera for a few seconds in a desperate attempt to achieve some kind of continuity.

It doesn't work. It's basically the equivalent of a Beatles tribute band in a world where the Beatles never played a single live gig and you can still experience everything they ever did by listening to their records. Everybody involved seems to be doing their very best, but it's simply ill-advised from the get-go, and a lot of fine actors (plus a few not-so-fine ones) are hampered by the necessity to ape somebody else's performance. This is a weird, forgettable misfire which tried too hard to capitalize on nostalgia. Not every episode of the original series is a work of unqualified genius, but most of them are far better than this; and inevitably, the original actors playing the rôles created for them are far better than this ludicrously belated tribute act. So rent the original instead. Even if you rate this film purely on its stand-alone merits, the good jokes don't exactly come thick and fast in comparison.

What is the point of this movie remake with modern actors doing impressions of the original TV cast? Cashing in and making money, of course - and making the film and characters available to an international audience who have sadly never experienced the joy of watching the original TV series (I own the box set and watch the classic episodes a lot).

So I won't be precious about it, despite my occasional winces at modern actors doing impressions of Arthur Lowe, John Le Mesurier, Clive Dunn, Arnold Ridley (plays Godfrey) who wrote the classic 1920s play The Ghost Train and who was also badly injured in World War I.

Toby Jones (same birthday as me but looks older!) is spot-on as Captain Mainwaring and has obviously studied his vocal ticks because he gets them spot-on.

Other well-known actors are well-cast too - and the dialogue is loyal to original TV series and even steals the plot of one episode to hang the whole movie on: the one where Captain Mainwaring stops wearing his glasses and bumps into things because he is trying to impress a female visitor.

Unfortunately, this film is ruined by political 'correctness'. There really is NO need to create an equivalent female home guard (ATS) to march alongside the men in order to shoehorn more women on screen. No need at all. No need for us to see Mainwaring's wife at all either, and she is no way what I would have expected.

Also, the word 'discombobulating' (which I hate) only entered British English from American English around the year 2001. So what is it doing in this script? Silly.

A silly plot, but that is fine - and it's always good to see what fools men make of themselves when trying to impress women (this movie shows why putting 2 or 3 female sailors on a navy ship with 300 men is a VERY bad idea indeed!)

Interestingly, in the original TV series, the writers Perry and Croft moulded all dialogue of the fictional characters to fit easily with the real-life characters of the old hand actors (many were over 60 or 70 at the time). That cannot be replicated.

So, not great, but no the cinematic car-crash it could have been - this is good in parts. 3 stars.

Far better is the BBC2 TV drama from last year about how Dad's Army came to be made. Can't remember the title but that is a must-see. This is passable but that's it. 3 stars.

Very Poor - Not What Was Expected - Dad's Army review by RG

Being of an age and being a avid fan of the TV series, I looked forward to this film. What a big disappointment, it lacked any resemblance to the original geographical location, to the characters involved and their day time occupation. The story line was very thin and did not motivate me as a onlooker. I shall continue enjoying the ongoing TV repeats.

If you have seen any of the original. If you were a fan of the original. Do not bother with this lot of old tosh. Gambon is nearest with Godfrey.......and that is about the most positive thing i can say about it. Little bit of money for Zeta. Bill Nighy wasted, what was he thinking?

When something has been done totally spot on.....why try and copy it? Especially badly!!

It suffers from looking very nice and cinematic but not really being funny, or having any real tension.

I can't fault anybody's performances - it's just somehow much less than the sum of its parts.

Firstly, the film only makes sense if you know the original 1970s UK TV series.

And if you're a fan of the series, the film will leave you very disappointed.

A criminal waste of talent in this film, which should never have been made. It's hard to describe just how bad it is

With a cast like this one expects a class product. I was prepared for a 'not-wonderful' after the reviews but not for this waste of time of a film. Toby Jones is excellent, Gambon too not bad but for the most part they were wasted on a dreadful script badly directed. You can feel Tom Courtney straining to deliver "They don't like it upp 'em Mr Mainwaiing" in a convincing way and failing miserably. Bill Nighy doesn't even attempt to catch Jones' manner; he just does the usual Nighy thing. One can feel they they all had a whale of a time working together but the result is dreadful. And Zeta-Jones is a pain to watch.

Who do you think you are kidding mr Film maker ? - Dad's Army review by porky

Enjoyable for an afternoon ,as long as you dont expect it to be anything like the Historic series.

Take it as a movie about Hapless Home guards and don't even try to see the series in its burn out ashes .

Much of the cast looked Bored all through it ,especially Bill Nighy playing Sergent Wilson

The new cast do a good job at portraying the characters, but the script is dull and lifeless, with very little humour. Disappointing.

A delightful British comedy, devoid of expletives and a joy to watch. Simple story line held together by excellent acting by the numerous celebrity cast list. Michael Gambon, Toby Jones and Bill Nighy can do no wrong. Catherine Zeta Jones has also matured into a lovely actress, excelling with tongue in cheek scenarios. I had never watched the tv series of Dad's Army so was not acquainted with the characters. This is a stand alone movie anyway.