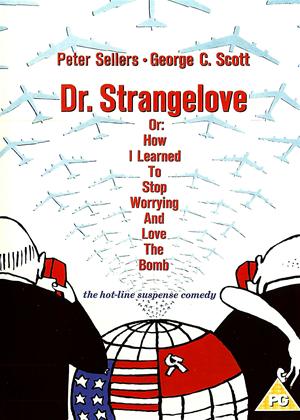 Peter Sellers does everything but the kitchen sink - Dr. Strangelove review by MH

Peter Sellers carries more roles in this film than some slackers could count.

This along with Barry Lyndon are my favourite Kubrick pair of films. Making good use of classical music it has a nice opening sequence and is relaxing and is darkly funny from start to finish.

Yes the effects may be a little dated but we get to see "Voice of Vader" James Earl Jones in his first main supporting role even if Slim Pickens steals the show as daddy war bucks. Really this is a half a dozen set film and has a relatively cheap feel now, but like Blackadder II and beyond it punches above its weight.

The main blink and you'll miss it plot development is about Flouridation, male menopause and the disenfranchise of old generals. But there is food for thought too as the Nazi's willingness to please no one but themselves triumphs over monogamy at the end.

Shame they never included food fight scene in the war room. I'm sure that would have been great!

PS Dr Strangelove is based upon John von Neumann and Werhner von Braun; a pair of Mephistophelean side kicks if ever there were any!

Of it's time - Dr. Strangelove review by CP Customer

Heard of this title on top comedy film lists so thought I'd give it a go. Expected more, but I suppose at the time it was quite a daring satire, but seems very tame now. I didn't laugh, and barely smiled at what was very gentle homour throughout. When modern audiences have experienced Airplane and Austin Powers, I was expecting more jokes.