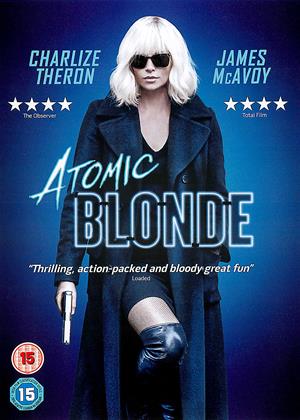 There is a fight scene where Lorraine Broughton ( Charlize Theron) fights with assassins in a building that is worth the price of a movie seat alone. This incredible scene, lasting for the best part of 10 minutes, sees the heroine fighting off assassins on a stairwell, with the action continuing in a room of the building, before continuing in a car in the street. All the more remarkable, as it seems to be done in one take. I did read that Leitch used some clever cuts, although it is basically a one take. There is a great realism to this fight scene, in the palpable pain of all, plus their breathlessness.

The film begins with the murder of an MI6 agent in Berlin. The organisation brings in Lorraine Broughton, a mysterious, hard drinking, chain smoking agent to clean up, if killing loads of people can be called cleaning up. She is also given the task of retrieving a list, a list that has the names and information of spys, in particular a notorious double agent.

Good performance from McAvoy, as the sort of deranged British organisational contact in Berlin and good support from Goodman as the grizzled old CIA agent.

The film belongs to Charlie Theron though as the mysterious agent, mysterious as in we know nothing of her past, we just accept that she's a ruthless professional. Theron plays this part brilliantly and her hard work and training in the action scenes shows, as she's phenomenal. There is also a humorous and emotional side to Lorraine.

Want to see it again on the big screen even before it comes out on dvd.

If only I cared. - Atomic Blonde review by KC

Charlize Theron is great and the fight scenes are fantastic but once again film makers forget that you actually have to give a toss about the characters, yes even in action films and I didn't, I couldn't care less who died or what the hell was happening to them, so the plot just seemed absurd. The performances where all fine, McAvoy, Young and Goodman offer support but the director never reaches that sublime point, as exemplified by Die Hard where you actually care what happens to John McClane and it's easy and exhilarating to root for him.

what a shame - Atomic Blonde review by roy

I was really wanting to see this. It has been on my list since it was in the cinemas. A huge and very talented cast.

I have not wanted to switch off a film after 30 minutes, for such a long time. This had nothing to offer. As punishment for picking such a bad film, my wife insisted she watched it to the end. It got worse and worse. I suggested several times that we give up on it, but no, i saw it to the end.

As punishment to her, I put the "extra features" on, but she fell asleep.

I can only imagine that they threw so much money at the actors, that they did it anyway.

Shades of Tarantino. Dark humour and buckets of blood. Basic premise is 'Don't mess with the blonde'. Elevated by the plot twists.

What's on the box? - Atomic Blonde review by MW

Yes, it was that bad.

I can only comment on the 15 minutes that I managed but it was cliched, signposted with cardboard cut out characters.

Charlize Theron used to be an actress that I had some time for but this offering has ended that once and for all. James McAvoy spent the whole time laughing all the way to the bank.

I've never bothered to comment on a film I've watched and I cannot remember ever 'walking out' on my Saturday nights entertainment and I've seen quite a few howlers in my time.

The fight scenes with Theron were laughable.

Don't bother with this. Just move on.

I am a junk action movie fan, since the 80s but Charlize Theron first caught my attention as a potential heroine action star when I saw Aeon Flux in 2005, a scifi film I enjoyed but wasn't a successful. Hadn't seen her in any starring action film since until now.

Things to enjoy about the movie

2. Great choreographed long edit "brutal raw" fight scenes (though, slightly sloppy in editing the stooges who are "waiting their turn" to have a go at hacking the heroine) - akin to Netflix's Daredevil, Old Boy (Korean version) and John Wick.

6. A surprisingly well executed love story that is tender and sensual. Not a dominating one, but substantial enough to be memorable.

Enjoyed this enough in hope for one or two more sequels.

I MADE A MISTAKE WHEN I REQUESTED THIS FILM. I SWITCHED OFF AFTER FIFTEEN MINUTES. LIFE IS TOO SHORT TO WASTE TIME ON JUVENILE RUBBISH.

Nothing Atomic about it, but there is a blonde (some of the time) - Atomic Blonde review by BS

The director ... oh dear. It looks like the guy watched a bunch of Bourne and James Bond movies, has aspirations to be (maybe he is) a music video director and has some girl power fantasies. Either way, what you get is neon, smoke, a cool chick who can single-handedly unarmed take out waves of dudes with guns, and strut about in cool coats in an 80s Berlin. Had high hopes with Blue Monday kicking off the intro, but the narrative and dialogue was painfully dull and clichéd. It's the kind of flicks where you just wish it would end, because it's just so boring. Ok, there's a few half-decent action sequences, including a brilliant piece of choreography in an apartment block stairwell. It looks good too. James McAvoy and Charlize Theron were wasted in this film. Someone has given this 5-stars, ha!

Very good soundtrack got the film off to a good start. Plot was a little confusing though and I wish sometimes Charlize would speak up a little or speak clearer. Perhaps it's my hearing, but I had to play back a couple of times and still couldn't always understand. However I don't think that mattered much. I don't think I've seen a film where Charlie smiles and this one is no exception. Very physical film with amazing action scenes. Lots of nice twists as well. Would happily watch again.

I loved it - Atomic Blonde review by KP

Charlese Theron is a beautiful lady and in this film, a spy. Love these spy thriller films based around the late 80's of the cold war/wall coming down era. Plenty of action and a delight, more please.