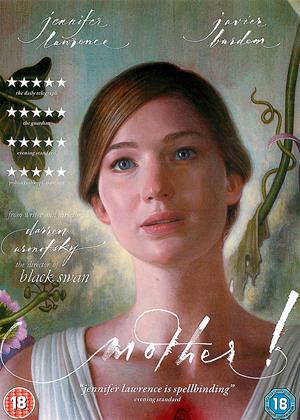 Hated it, couldn't stop watching it - Mother! review by SD

"Let's make a two hour movie about Jennifer Lawrence's boobs, and put in a rape scene to remind women of their place, and tell everyone no means yes."

"Coolio. Is there a story? What is people ask?"

"Don't worry brah, if they ask I'll just make something up, people are dumb as shit."

10 out of 37 members found this review helpful.

Im not in any way a follower of any religion but I saw it very clearly as a Creation/God /Christian Parable....Bardem the Creator....God Figure , The Acolyte of Bardem,Ed Harris and his Wife (Adam and Eve) and his two Sons,Cain and Abel,brothers ,one killing the other . Eventually after the Many Wars in the Holy Lands all around God ,who demands the Love and Praise of his followers ,Gives his only Born Son to Humankind Who in their Ignorance Kill him, eating his Blood and Flesh as Sacrement . etc..... it was also a powerful story of Love and how it can be taken for granted by the Blind,Taken but never Fed and Nurtured . like with nature .the Earth Dies and the Creator ,Bardem,Starts Over Once Again...fed only by the Love and Praise he greedily takes from his devoted follower.who loved him unconditionally .

Deeply meaningful symbolism and yet obscured by a distracting overlay of discomfort for the protagonist in her own home being invaded by destructive and brutal outsiders .

A Must see Movie.

9 out of 12 members found this review helpful.

This is possibly the worst film that I have had the displeasure of watching in a long time and trust me I watch a lot of movies both good and bad. What I fail to understand is what numpties in Hollywood agreed to fund this movie and pay big names like Jennifer Lawrence.

Very disturbing but if you get the references it makes perfect sense and is a great statement - Mother! review by PR

Read what its about after you watch it then make up your mind. I couldn't stop watching. Proper statement of our times!

There are endless reams on the internet about what this film is about, but frankly all of them fit like cinderellas slipper on an ugly sister, and ugly is certainly the right description for this film.

Superb acting from all the main parts, but sadly it is effort wasted.

Slow to unwind psycho thriller and when it does unwind the emphasis is definitely on the psycho. It's weird! Perhaps there's an obscure allegory somewhere in the plot but someone would need to explain it to me. Some will hate it I'm sure but I found it strangely engaging. Imaginative and with good performances from the two leads.

All for creative films but gave up half way and went to bed. Dreams were way more entertaining. My partner watched it through and filled me in on the half I missed. Thank god - sorry all those who read religion into this film - I went to bed. Films like this are prob more suited to arts cinema where you need to analyse and interpret every frame. Lost for the right words to aptly describe this film but it would go along the lines of a rather painful load of tosh.

Had to switch off after 30 mins - far-fetched and insane - hated the whole unreal story - prepare to be thoroughly bored.

What an absolute load of rubbish !! I've never seen a such a boring uneventful load of old tosh. I watched it till the end thinking it's going to get better but, alas no !

Thought the same as a previous reviewer i.e. "

This is possibly the worst film that I have had the displeasure of watching in a long time and trust me I watch a lot of movies both good and bad. What I fail to understand is what numpties in Hollywood agreed to fund this movie and pay big names like Jennifer Lawrence."

What a thoroughly confusing, boring, weird film. Jennifer Lawrence should never have agreed to this. Absolute tosh!!

Sometimes the biggest of budgets can turn even the most skilled of filmmakers into amateur auteurs. It’s with great sadness to report that writer/director Darren Aronofsky has fallen into this pool with mother! Armed with a $30 million budget and an all-star cast, his picture seems to be airing on the safe side, just in case audiences were too weirded out by the likes of The Fountain and Black Swan, too subtle with the weird. No worries about this film going over any heads as Aronofsky hammers his allegory so bluntly that the exclamation point in the title is too fitting.

Jennifer Lawrence plays the wife of a poet portrayed by the handsome Javier Bardem. They live in a house that is being newly renovated. He’s hoping to finish his greatest writing yet. She wonders why she is seeing visions of Silent Hill around the house, flashing in and out of reality with Cronenberg style grossness. What does it all mean? Don’t worry, all the questions will be answered more open they should be.

Guests start coming to the house as Bardem’s fame builds. Ed Harris plays a dying man that is a fan of the poet, Michelle Pfeiffer his reactive wife. Two of their feuding sons happen upon the house, played by Domhnall and Brian Gleeson, one of them killing the other inside. All of this is happening so fast, including the pregnancy of Lawrence that happens during these events. Bardem’s writing explodes and the house is literally exploding with people, including Kristen Wiig as a herald and Stephen McHattie as a zealot.

Would it really be such a spoiler to reveal that all of this happens to be an allegory for Mother Earth, existing not in reality but within a visceral mental landscape? It shouldn’t when the walls literally break down and everything becomes obvious within the first half of the film. And for the rest of the movie we’re essentially watching weirdness for the hell of it, most if not fully aware what all this means. And is that really what I should be looking forward to in an Aronofsky picture? Action scenes, special effects, and gore? That’s all there is to look forward to when all has been deciphered in record time for a movie by this filmmaker.

I guess to the film’s credits, the effects are kinda neat if they were existing in a much different movie. As I mentioned with Lawrence’s visions, they’re delightfully Cronenberg in their depiction. Spots in the floor turn into gooey passages and toilets become clogged with bloody and disturbing creatures. The house, which contains the entire story because, surprise, it’s supposed to be Earth, turns into a glorious mess of destruction. Walls explode, gunfire erupts, blood spills and savage zealots rip apart all inside. If the story doesn’t go anywhere by the third act, the effects at least get crazier with Lawrence’s labor pains shaking the house, splitting the floors, and setting fire to bodies.

Had it been from any other director, mother would have been considered a decent effort of arthouse entertainment. But it’s shockingly disappointing to say that the acting and special effects are used to prop up a rather flimsy story that makes a statement as overly bold as a PSA for the kids. I suppose the poster is not too shabby with its painterly quality, but I don’t think I can look at it the same way again after the clever meme of it being pasted on a cereal box with the title “Oops! All Allegory.”