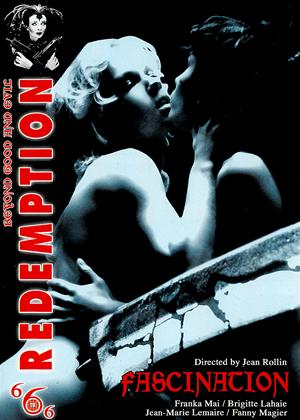 This film has probably the most striking opening of any from French Director Jean Rollin – two young women dressed in white dancing together on a bridge walkway over a picturesque stretch of water, followed by a well-to-do group entering a cadaver-strewn abattoir for a genteel blood-tasting ceremony. Blood is a cure for anaemia, apparently – its taste is very ‘fashionable’.

This is followed by scoundrel Marc (Jean-Pierre Lemaire) who has just double-crossed his band of robbers and takes refuge in an ornate mansion, where he meets Eva and Elisabeth who claim to be preparing the property for when the owners return. He places the two girls in very lose home-confinement (leaving them at liberty to enjoy bouts of lovemaking that – rarely for Rollin – carry a genuine sexual charge) they immediately assume the psychological upper hand by undermining Marc and refusing to be intimidated by him. Indeed, Eva seems particularly stricken with him.

Although I loved the use of stark black and white in Rollin’s ‘Rape of the Vampire’, the colour and lighting here is beautiful. Crisp autumnal dawn sunlight, mist and the vibrant hues of the various costumes – all are intoxicating and spellbinding (although there’s a variant in weather and conditions rendering continuity a mess – mist, sunshine and rain – all in the space of the same sequence).

The owners return – upper-class ‘bourgeois crackpots’ who are, of course, the blood-drinkers from the opening moments and put a grisly end to Elisabeth, while Eva appears to save Marc by taking him to the stables, before making it clear she is the most unhinged of all by killing him and blaming the dead Elisabeth.

The acting is particularly strong here. Lemaire is excellent as the caddish Marc (doomed from the moment he enters the château but the last to realise it), and the ever pouting Brigitte Lahie excels as Elisabeth (equally doomed, but much less predictably so).

Rollin is at his most visually confident here. ‘Fascination’ is probably best known from its image of Lahie as a grim reaper (naked under the cowling), complete with scythe striding across the picturesque stone bridge in red leather boots.