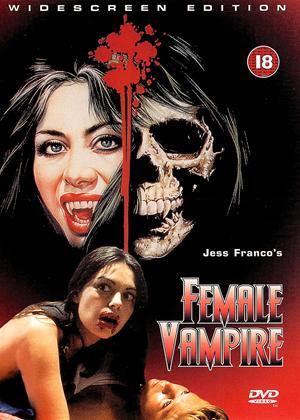 Opening with Daniel White’s immediately inappropriate romantic music, the beautifully bodied Lina Romay sweeps out of the mist toward the camera – and then into it (after Director Jess Franco and his lens have lingered over her inguen). Clearly an exploitation film from the offset, these opening moments are nonetheless extremely evocative and mysterious. Romay’s unblinking stare alone is more than enough to entice and her Irina Karlstein is a true siren; within seconds she has seduced and claimed her first victim.

There are many different versions of this film. The storyline, such as it is, involves Countess Irina, last in the line of a family of vampires. After a series of conquests both male and female, she finally finds someone she cares about, only to drain him of his life fluid just as she did with her other victims.

An atmosphere of horror is difficult to sustain in blazing Spanish sunshine, the awkward dialogue issued through a fog of unconvincing dubbing. And yet, with scene after scene featuring softcore scenes of near naked Lina Romay indulging in sexual acts, I am shallow enough to ask, who cares?

Even that wears thin after a short while. Of course there is an erotic charge here, but very little else. There were plenty of ‘exploitation’ pictures released during this period – even Hammer films weren’t immune to such titillation – but most at least fed the explicit sexuality with an equal measure of horror, complimenting both styles and pushing the vampiric genre into a convincingly explicit arena. ‘Female Vampire’ appears mostly to be softcore purely for the sake of it, often ineptly shot – and always accompanied by the same music. The few moments of Irina drifting through foggy woodlands, sometimes accompanied by an equally naked conquest, comes close to the kind of dreamlike mystery mastered so regularly by Jean Rollin – but you have to endure a great deal of monotony to find them. Largely unwatchable, I am sorry to say.