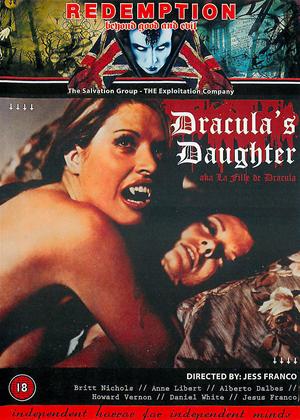 Not released
Night of the Assassins

Britt Nichols plays Luisa Karlstein who visits her terminally ill mother. Rather coldly, the rest of the family appears to have turned up simply to stand and watch as the ill old Baroness succumbs to death. With her dying breath, she tells her daughter of a family curse.

Even before this reveal, a number of ongoing, gruesome murders have been occurring. Nubile young women, often in a state of undress, have been spied upon and are then killed by a clearly female vampire.

As always for Jesus Franco films, such story-line as there is meanders greatly with protracted scenes of women in jeopardy, and enlivened by ongoing scenes of softcore sex – here, Karlstein reveals her lesbian tendencies in a number of scenes which have no bearing on the wafer-thin plotline. This is usual for such films, as is the stunning leading lady – Nichols continues the tradition of delights such as Lina Romay and Soledad Miranda, but doesn’t seem to attracted the same level of attention. This may be because her appearance bolsters a film that is otherwise desperately uneventful and dull.

Even the eroticism here is … odd. There is a routine in which a ‘dancer’ (prior to her murder, of course) simply rolls around on the floor in a bar. It is red lit, so she is clearly performing an act (as opposed to suffering some fit). People watch in stony silence, she rolls around some more, smiling. Then, she stands up and they applaud! Why? It is only shocking because she wasn’t escorted out of the place by an ambulance crew. Where is the exotic eroticism of ‘Vampyros Lesbos’ or ‘She Killed in Ecstasy?’ Whilst hardly polished films themselves, they did nevertheless escape the drudgery that fuels each dialogue-heavy scene here.

A constant delight with Franco films is the juxtaposition of horror set in beautifully filmed, exotic sun-kissed locations. Such visual conflict often works, but not so much here, for what panoramic views we get of Portugal (where this is filmed) are rare and the footage is often used more than once.

Back to whatever passes as a story, and it appears that the undead Count Karlstein (Franco regular Howard Vernon, robbed of dialogue here) is in fact Dracula himself. He doesn’t contribute a huge amount. In fact, his two scenes involve simply rising from his coffin, watched by a horrified Luisa, shortly before she too becomes a vampire.

What begun as an interesting idea soon became a chore for the cast and crew (and for the audience), it seems, as no effort is made to make any of the events entertaining or horrific or even particularly sexy. One point in its favour – we are treated to many brave close-ups of teeth baring fangs. Brave because, such close-ups invite scrutiny, and the fangs are very realistic – something the otherwise superior ‘exploitation’ film-maker Jean Rollin couldn’t always get right.