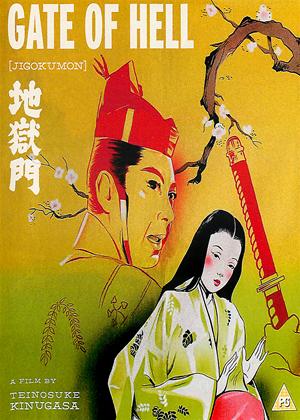 Reviews (2) of Gate of Hell

Ravishing -- but the story is simpleminded. - Gate of Hell review by MS

I've never seen a film that looked more beautiful than this -- full of striking and ravishing images -- many shots were really like works of art. But the story was overly simple, the heroine a cipher, and it had a tacked-on unhappy ending that was downright silly. The tragedy didn't seem in the least inevitable, or even understandable -- but that was mainly because we never had a clear idea what the heroine was thinking or feeling.

This visually gorgeous film is one of quite a few Japanese movies in which samurai, whose inhumanly strict code of honor requires them to behave like emotionless fighting machines, are revealed to be passionate men who care deeply about something or other, usually something that conflicts with their duty ("Harakiri" is a particularly fine example of this genre). It's also a film intended purely for the Japanese market, so you may have difficulty understanding why the characters behave they way they do unless you have a basic grasp of historical Japanese culture, in the same way that Japanese viewers might be confused by "Witchfinder General".

Lady Kesa, who is really the main character, inevitably comes across as a bit helpless and passive because that's how Japanese women were expected to behave back then. She is literally her husband's property, and could suddenly belong to somebody else if the dim-witted shogun her husband serves thinks that would be appropriate. So when minor samurai Morito saves her life by taking on overwhelming odds, falls madly in love with her, and as his reward for this and other brave deeds, asks for her to be made his wife, she's in a tricky situation. She's also somewhat conflicted; she loves her husband because he's a very nice man, but this other fellow has spectacular ways of getting her attention!

Unfortunately, heroic though he may be in battle, Morito is a borderline madman. When he dedicates himself to a cause, he'll fight with such single-minded determination that he's a superb warrior, and he'll denounce his own brother rather than betray a master he has sworn to serve. The trouble is, his concept of being in love runs along exactly the same lines, to the point where "love" is entirely the wrong word for it. That's not a spoiler because it's clear from the start how obsessive Morito is. Kesa's husband Lord Watanabe, on the other hand, is a truly noble man who shrugs off incidents a more stereotypical samurai would take very seriously indeed because he knows how absurd it is for supposedly rational men to fight to the death over wounded pride. What he lacks is Morito's ferocious intensity, and it seems as though when they eventually fight, as inevitably they must, he won't have a chance.

Apart from the superb cinematography, this film's strength is the way it shows how human beings locked into a totally artificial set of rules are still human, for better or worse, and may define such things as love, honor and heroism in very different ways, some of which are ultimately more valid than others. In a thinly veiled critique of the social values which had recently dragged Japan into a disastrous war, a man with a severe personality disorder who acts as if he's at war with everyone all the time is hailed as a hero, while another man is constantly criticized for behaving sensibly, and the nobleman whose orders they all have to follow is a pompous fool.

What lets it down a bit is some rather stylized acting, and a very simple plot which doesn't give the main characters enough to do in the lengthy midsection. In particular, it's obvious that the moment Lord Watanabe finds out how serious the situation is, a showdown must occur, and that'll be the end of the film, therefore he has to spend most of his screen time in blissful ignorance doing nothing much. He seems like a nice guy, but it's not exactly riveting. Still, it all looks absolutely gorgeous.