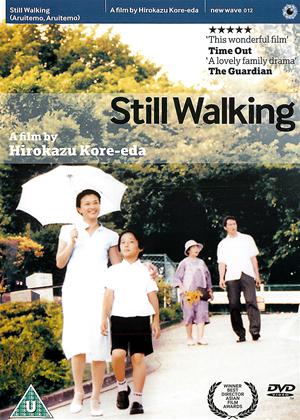 The loss of a child must be the worst thing that can happen to a parent. This film takes a snapshot of a family which has suffered just such a tragedy.

Every year, on the anniversary of the death of the family's oldest son, the remaining son and a daughter (plus their partners and children) gather at their parents house to commemorate the deceased son and we join the family on one such occasion. The film gives the impression that the surviving siblings can never live up to the memory of their older brother and the death seems to have driven a permanent wedge between many of the family relationships - between the two parents, for example, and between the father and the second son. In a way, this family seems to have suffered two tragedies, the death of the son and the subsequent impact it has had on the relationships between the rest of the family. It is the latter of these which the film really focuses on.

If none of that sounds like very cheery viewing, the film is still very much worth watching. The writing and the acting are superb. Although a particular sadness has beset this family, the dynamics are of a sort that can be seen in many families. For the most part the relationships are characterised more by sniping and distance (emotional and physical) than by out and out arguments but there are also moments of warmth and humanity. Ultimately, despite a lack of drama or action in the film it manages to be compelling viewing.

Another exquisitely judged family portrait by Koreeda. He has perfected the art of revealing without preaching and seems to be able to get inside a family's dynamics with effortless ease and the deftest of touches.

Each character is fully rounded and credible. Profound moments suddenly crop up amidst the apparent trivia, with humour and tart repartee to the fore.

This is life in microcosm, but presented with artistic perfection.

From whichever industrialized nation one lives, this slow-ish Japanese movie tells a story centred round a family of three generations which would could be told from many film-makers in many of the worlds industrial countries. Expectations, how to cope with ailing health in parents, grand-children, how to learn to forgive all centres round the grandparents house over a few years. Good script, well played acting and camera. Not a popcorn movie though!!

Not for a single second was I distracted from the screen, not once! - Still Walking review by DW

You're in for a treat, it's a cracking film. Might be best to read the resume so that you know the background to this extended family gathering before settling down to some top entertainment, educational too.

I watch a film most evenings, increasing often they're sub-titled World Cinema films so I'm slowly getting to know & admire the genre. I know I won't be distracted by background music, that the ending is unlikely to be fully or even partially conclusive & it's likely to occur suddenly even though I think the plot has more to show. This time I spotted an occasional trait; there isn't always a stand-out central character that the script allows to hog the limelight. Instead, there are scenes that don't include the "star" but which add context to the overall content of this slow-moving on location film. (That wouldn't go down well with some of our more ego-conscious British "lovies")!

The realism level is high so it's fascinating to see the inner workings of sub-urban Japanese life. I felt like an uninvited but welcome stranger on the outer circle of this annual gathering. The external shots of the neighbourhood were educational too though I'm not naive enough to believe that in every Japanese small town road there's a little old lady slowly sweeping the road with a broom & long-handled dustpan, stopping only to respectfully bow to her near neighbours of many years. The things you learn whilst enjoying yourself, who'd have thought it?