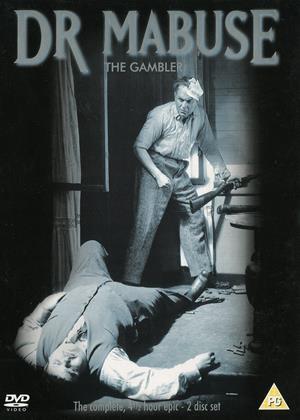 Sign up
L'Atalante and the Films of Jean Vigo

Reviews (2) of Dr. Mabuse: The Gambler

This film is almost a century old, so you have to cut it some slack. In particular, it's silent, therefore everyone overacts because that's what they had to do to get the point across without sound. And you have to remember that what pass for "special effects" really were pretty special in 1922. Oh, and, in case you hadn't noticed, it's four and a half hours long. Also, although this has nothing to do with the movie itself, what's with those ludicrously bad English translations of the subtitles?

But you know what? It's magnificent! From the extraordinary 20-minute opening sequence of Dr. Mabuse masterminding a crime so elaborate that nobody else even realizes what happened and the fortune he ends up with is perfectly legal, while simultaneously overseeing an empire of crime so cunningly hidden that its activities look like ordinary things done by ordinary people, many of whom are Mabuse himself in his impossibly numerous secret identities, the film draws you into a nightmarish world where a dangerously charismatic evil genius schemes to become a living god by taking control over a society so decadent it doesn't even notice what he's doing, and probably wouldn't especially care if it did. If that sounds familiar, some of Mabuse's rants about supermen and the triumph of the will are so eerily prescient that I honestly wonder if Hitler might have pinched a few of his most quotable lines.

Dr. Mabuse is a fascinating monster, and Rudolf Klein-Rogge gives a performance which makes the one everybody remembers him for, Rotwang in "Metropolis", seem downright dull. And since he's the star of this movie rather than a supporting character, he gets much more to do, and by golly does he do it! Horribly seductive as the psychopathic psychiatrist who surely must have inspired Hannibal Lecter, utterly bestial when he lets his hair down and gets roaring drunk, and tremendous fun in the various bizarre disguises he constantly adopts, none of which, given Klein-Rogge's extremely distinctive features, would have fooled anyone for a second, but hey, it's a movie! Oh, and he may technically be the first ever movie supervillain, since he does have actual superpowers.

While all this is going on, we're treated to a whirlwind tour of the rotten underbelly of early 1920s Berlin, from smoke-filled illegal gambling dens that offer poker or cocaine depending on your tastes, to the opulently decadent haunts of the idle rich - one dissipated aristocrat lives in a mansion so horrifically over-decorated that even the characters in the movie notice it's a bit much! Oh, and of course there's a heroic cop, and a few other people who are at least halfway good. But it's Dr. Mabuse who steals the entire film hands down; Fritz Lang always was far better at portraying baddies than goodies. And while this movie isn't as visually astonishing as "Metropolis", it's no slouch in that respect, and the story zips along with incident after incident, some of them not terribly plausible (logic was another of Lang's weak points), without at any point getting bogged down in all that preachy allegorical stuff that keeps cropping up in "Metropolis" just when you'd much rather see more of Rotwang going completely nuts, or that loopy nympho robot.

This film is both a true cinematic classic and a tremendous amount of fun! Watch out for what appears to be a cameo appearance by Spike Milligan before he was born - maybe that Charlie Chaplin mobile phone footage is for real? One little word of warning, though. This company will send you the two discs as separate rentals, and since they appear to have only one copy, you may have to wait a fortnight to see the second half of the movie like I did. You can probably get a classic film like this through your local library, and they'll definitely let you have all of it at once. Only rent it here as a last resort.

A truly sumptuous film. People may watch second rate effusions like “Avatar”, but why bother while films such as this are available? Fritz Lang’s skill was superb. I often complain that modern films are self-indulgently too long and elaborate, and shall continue to do so, yet this is four and half hours long ... and is worth it ... mercifully, of course, divided into several acts. A film made in 1922, so soon after the Great War and yet so lavish and ambitious in casting and setting, evokes awe. Again, Fritz Lang could do it and was given the resources; no place for argument.

This restored version is excellently presented and makes the most of the original sharp, clear and controlled filming ... though I remark that English was clearly not the first language of whoever wrote the sub titles! – some are bizarre or wrong; dreadful - “faith” bewilderingly for “fate” ... Keep a German dictionary beside you.

- The excellent expressive acting – silent film acting is a particular art on its own and here it is at its height of perfection.

-The lavish settings and scenery are a joy; you step into a vanished world of truly smart night clubs and gaming houses, gentlemen in properly formal clothes, ladies in opulently seductive dress and jewellery, against a background of expressionist art and architecture, of half forgotten motor cars ... of forgotten street scenes, of the frenetic Bourse of the time and so on.

- The accompanying musical score is a delight throughout..

Never mind that the details of the plot are preposterous ... as those for Sherlock Holmes are ... it is a framework for all the rest, with one of the most convincingly chilling villains you can imagine ... one who, at a time when Herr Hitler was just in the making, talks of “der Macht des Willens” and acts accordingly.

I have to buy a copy of this film! May I award one star above the regular maximum? I find this a more impressive film, even, than Metropolis.