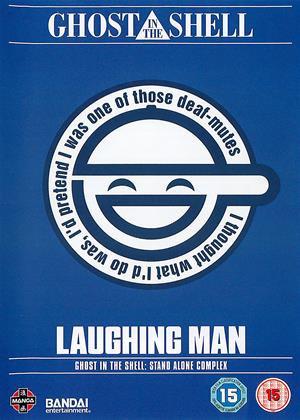 Rent other films like Ghost in the Shell: SAC: The Laughing Man

Sign up
Ghost in the Shell: S.A.C.: Solid State Society

Sign up
Ghost in the Shell: The New Movie

Reviews of Ghost in the Shell: SAC: The Laughing Man

Ghost in the Shell is one of the most detailed and thoughtful of anime sci-fi worlds. Whereas most anime of the future is a mess of holograms, robots, and starships littering the screen, there's an eerie believability to this speculative fiction where smartphone technology comes standard in your brain. Naturally, such dangerous additions to human culture can lead to more frightening hackers and that's where the special task force of Section 9 comes into play. Their priorities range from stationary code hacking to mobile chases through city streets of tech-based terrorists. Unlike the films, Stand Alone Complex explores more of the characters and this world.

This movie, unfortunately, rushes its central arc of the show into a stuffed package. The format of the show was to be that of a shifting focus, sometimes dealing with individual cases, other times the overarching plotline of the infamous Laughing Man hacker. This movie keeps the focus on The Laughing Man, trimming and skimming through most of the material into an abridged version. The hacker that Section 9 seeks is one that is targeting the government to reveal a suppressed cure. His tactics include hacking into certain influential figures to hold an audience and hacking into everyone else's vision to obscure his identity. The more Section 9 digs into this case, the more corruption they uncover that turns them into much bigger targets for other terrorists and the Japanese government.

This is an incredibly dense story and it doesn't bode well for a shortened movie version. Because the movie version moves at an erratic pace to cram in all the essential plot points of the case, we lose a bit of the character in the process. It's rather a shame considering how unique our procedural posse happens to be. Major Motoko has an interesting past and a complex mental connection to The Laughing Man's plight. Batou is the tough-as-nails brute of the group with a love of guns and dogs, not afraid to have a modicum of fun on the job. Ishikawa is literally the most human of the group, acting more as a traditional detective of sorts with the least amount of cybernetic attachments, as well as a strong family life at home. And there's a host of other characters in Section 9 that this first season, unfortunately, doesn't have as much time for, so you can imagine how much time they're given in this mad-dash of a film.

The animation is some of Production IG's best for television. I knew they could do stellar work for their films, as seen in the Ghost in the Shell movies, but this production simply stellar for the small HD screen. The characters are well-drawn and have great color, but just take a moment to marvel at the astonishing backgrounds. Most anime I've seen tends to wash out cityscapes, but not this show. I found myself in awe just staring at the office buildings in the background during the night scenes where you clearly see desks and lights turned on in the smallest corners of the screen. It's those little details, along with the thoughtful design of everything from the food to the cars, that makes me love Ghost in the Shell all the more.

It's tough to recommend The Laughing Man, as with most compilation films. If you've seen the show, there's no reason to see this. If you haven't, I'm a hesitant to recommend it as the movie skips over some of the finer details and characters that ease the viewer into the world. Let's put it this way: If you're not willing to take a 26-episode plunge into the best cyberpunk anime TV series ever made, you may as well spare two hours for this abridged version. I know that's not much of a recommendation, but what can I tell you? It's an engrossing story with some of the best television animation of the 2000s, but it's better seen in its complete form rather than this quick cash-grab of a clip show.