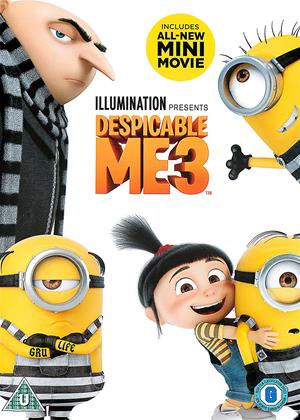 Reviews (8) of Despicable Me 3

Not too despicable - Despicable Me 3 review by NC

Not sure how much of the clever bits the small ones would actually get. Appears some of the cleverer lines are kept for the cartoons now. A lot of the so called adult films are quite missing out........

After Minions, what were we to expect, seems the writers responsible for DM1 and DM2 have really left the building.

So what now? Invent a brother who is rich and annoying. Poor and not worthy of 1 star.

Lost interest - Despicable Me 3 review by am

Loved the 2 before. Number 3 not so good, which is a pity because it would seem that there is a winning formula to follow. Please don't make number 4.

Annoying - Despicable Me 3 review by sb

Really enjoyed the first two , both were funny with a big heart , this one is a complete mess , it’s all over the place , irritatingly loud and all the previously likeable characters are just obnoxious, it’s just a load of odd scenes cobbled together into an incoherent mess, utter crap.

Disappointing! - Despicable Me 3 review by CW

Loved the first two films, but this one was a big disappointment, the villain is so irritating and annoyingly awful, but not in a good way, villains should be nasty, this one made me want to switch off!! The Minions are brilliant, there isn’t enough of the children either. Shame, but a film too far!!

The first one was great. The second passable... this one is terrible....

It felt like little was put into the story and therefore I can only imagine it was created as cynical means of creating cash for the studio and actors.

Enjoyable - Despicable Me 3 review by TB

In the main I have to disagree with the majority of the reviews so far. Yes it’s not quite as good as the first two but I still really enjoyed it.

The minions were as funny as they always are and the film series still has the most adorable animation character going in Agnus. I also loved the different twist from the usual villain, with this one having a quirky 80’s persona and great musically tracks to accompany his every move.

Storyline wasn’t as ambitious as in the previous films but it was simple, understandable didn’t take anything away from the film just simply being enjoyable to watch.

Love the Movie - Despicable Me 3 review by EG

there is not many places these days to rent movies

This was the shrugging consensus I heard of the adults that left the theater after seeing Despicable Me 3, the most tired, ill-thought and mundane minion picture to date. But haven’t the Despicable Me movies always been cute? What is the point of continuing on with these movies if they have nothing else to offer? Illumination Entertainment can only ride that easy merchandising train for so long and their carelessness with the latest picture reveals that they’re willing to run this franchise into the ground.

The stories at play this time around feel ripped straight from a Saturday morning cartoon on its last legs, as though it has already jumped the shark. No, wait, wasn’t there a shark in Despicable Me 2? How prophetically telling. Anyway, Gru (Steve Carell) and Lucy (Kristen Wiig) are adjusting to being both newlyweds with kids and co-workers as secret agents for the Anti Villain League. What an interesting scenario that unfortunately will never be explored. The couple are dispatched to bring in the evil Bratt (Trey Parker), a 1980s child star that clings to the nostalgia of the era so hard he becomes an 80s themed villain. Using expanding bubblegum and exploding Rubik’s cubes to snatch a diamond, his appeal wears thin after the first scene. It must have also not done much for the writers either considering how they retreat from 1980s gags to 1980s references.

Later, Gru will discover he has a twin brother by the name of Dru (also Steve Carell). Having recently been fired from the AVL for failing to foil Bratt, Gru decides to take up villainy once again with his brother that desperately wants to prove himself as a criminal. This could lead to some interesting hi-jinks as Dru is far too chipper and loving in comparison to Gru’s stand-offish nature, but, again, no luck. There are far too many other plots at play here with Lucy trying to be a stricter mother, Agnes trying to find a unicorn in the woods and Margo trying to ward off an obsessed boy. Oh, and the AVL has a new boss that hates Gru. Oh, also, Dru lives on a secluded island that celebrates a weird cheese festival.

Did I forget anything? Ah, the minions! How could I forget the most iconic mascots of this runaway franchise? It’s easy to do so with a script so bloated and tired that it forgets to give the yellow pills something to do. Sick of Gru’s goody-goody lifestyle change, the collective quits and goes out on their own to be bad guys. This lands them in prison where they become the toughest prisoners for some reason. But, wait, I thought minions needed a master to survive? Or do minions also have amnesia?

There isn’t much of anything I can recommend about this third installment, even on the most base levels of entertainment. One aspect I always admired about Illumination Entertainment was their ability to cast actors that would provide voices you wouldn’t expect. I could hardly tell Russell Brand was voicing a mad scientist or that Jon Hamm was an eccentric 60s henchman. But it’s obvious that Trey Parker is doing the voice of the villain as he just can’t shake that South Park tone. It’s even worse when considering that his character of Bratt is supposed to be a master of disguise and yet he puts on his recognizable voices that do little to mask his identity. Similarly, Steve Carell's portrayal of Dru is nothing special; just the same voice as Gru with a higher volume.

I could forgive such a clunky and corporately soulless script if it were just funny, but nothing sticks here. The 80s themed villain becomes more dated than his references, the twin brother angle is poorly constructed and the various subplots of family come off so quick and tacky without any culmination in the climax. I have never been a big fan of the Despicable Me movies as I always found them to be just a cute excuse for action and coos, built more for selling Happy Meals than being a tale of silly antics and family. I can only hope that the most devout of audiences will pick up on the dwindling ideas of this franchise that are more apparent now than ever before.

Sure, kids will still gain a few laughs as this series continues on with crude jokes, but I’m afraid the adults drug along for these movies will be left in the dust.