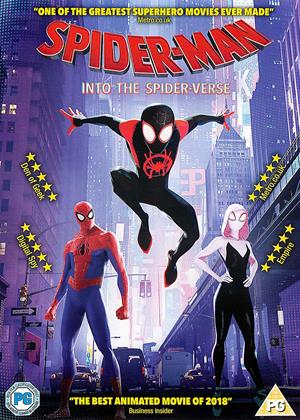 Reviews (8) of Spider-Man: Into the Spider-Verse

I didn't want to this, but... - Spider-Man: Into the Spider-Verse review by RS

I saw the trailer and had no desire to this - there was even a scene in the trailer with a cop that looked plucked straight from 'Cloudy With A Chance of Meatballs' - but I got an invite to a free screening and had a couple of free beers before going in with my 11 year old daughter - At first I thought Sony was projecting a 3-D movie without the glasses and was ready to complain and then something happened - I kind of got sucked into the Spider-Verse I guess, where you are bombarded with rule-breaking, mind-bending, genre-bending animation that seemed to bring comic books to life - by the end of the film I was in love - and the end of titles alone were like watching 2001 - A Space Odyssey for the first time! So if in doubt - there is a reason why this won the Oscar and the Bafta, beating Incredibles 2 - it's innovative, inventive and exciting and like the originalLego Movie feels fresh, witty, fast and groundbreaking.

Best Spider-Man movie - Spider-Man: Into the Spider-Verse review by PC

Forget all the previous Spider-Man movies,luckily the makers of this film didn't as they make many funny references to previous versions. This is clever, funny and clearly loves the comics from which it has come. The animation is a little bright and frenetic but always entertaining, will worth watching even if you are not a normal Marvel follower.

Quite simply - Amazing! - Spider-Man: Into the Spider-Verse review by RichM

If you're a fan of Spider-Man, Marvel or any Super-Hero film then you owe it to yourself to add this to your eyes and brain collection! It's funny, so unique and visually stunning.

Believe or not I liked having more super-heroes in this film. - Spider-Man: Into the Spider-Verse review by DS

Hoorah, a one-off Marvel super-hero story that does not mesh into other stories or heroes and is entirely stand alone. What a breath of fresh air. How do you make a Marvel super-hero story and particularly a popular hero, Spider Man, who has had so many incarnations I think I might be up for the role soon, fresh? The makers of this movie, and there's a roster's worth of names, came up with an idea, whilst not original, certainly boosted the old tropes and made fun, in a loving way, of the whole Marvel Universe whilst creating an interesting and to point super-hero story.

What's more we're in a world of animation here and yet an old gimmer like me felt more connected to Miles, his parents and the jaded Peter B. Parker with his fat gut and pizza guzzling ways. How can animation hold my interest and make me genuinely laugh more than skilled on-screen actors and action?

The main protagonist Miles is the glue that holds the story together, more like a kid in a difficult situation than any host of live-action stories on the same tack. More believable, more fun, and more downright relatable. Aside from the animation and voice acting, it must be the writing, the feel for how a young lad might possibly react in these out-of-the-world and in-the-real-world situations.

The set up before the real story begins is engaging and enjoyable and drags you into Miles and his parents situation and once we get to the larger-than-life King Pin, voiced by Liev Shreiber believe it or not, and the funny but no irritating Peter Parker and the Peter B. Parker this show is on the road. Every character is well-fleshed and makes sense in their own ways without their own world and it was a blast from beginning to the very funny end.

The artwork and animation are superb and cleverly harks back to the comic-book origins and seamlessly mixes different styles to great effect.

Certainly, this movie came along at the right time for me, not a comic-book fan or particular big fan of Marvel, its strength was it dragged me in, and I enjoyed the characters and story. Maybe this alienated it from real fans of these films, but I cannot see it. If you like comic-books how could you not like this film? The voice acting is perfectly suited to each character, believable and fun, and not annoying as I can find these types.

So, there you go, a Marvel movie about a superhero, with fighting and explosions, that I enjoyed. I recommend Spider Man: Into Multi-Verse it is how comic-book films should be made.

Good reimagining. - Spider-Man: Into the Spider-Verse review by HM

Reviews ecstatic, so didn't believe it would be all that good (see reviews of Black Panther; adored by critics but the usual CGI mash-up and slated by members of the public). Actually it is well paced, imaginative, funny and action packed with purpose rather than for its own sake. Great entertainment. Enjoy (you will).

It feels like many movies crammed into one, all jostling for your attention: it is at once the heartfelt origin story of Miles Morales’s Spider-Man, a crazy kaleidoscope of cartoon art styles, and a comedic meta-commentary on how many Spider-Man movies we’ve had. It somehow manages to work, mostly. Although the film borrows its title from Dan Slott and Olivier Coipel’s 2014 crossover event ‘Spider-Verse,’ it proves to be a surprisingly faithful adaptation of Brian Michael Bendis and Sara Pichelli’s original “Ultimate Comics: Spider-Man” run. Nicolas Cage is the most fun as the hard-boiled, melodramatic Spider-Man Noir. The stylistic experiment doesn’t fully pay off, for example, the depth-of-field can strain your eyes if you aren’t focusing on the same thing as the camera wants you to, and certain shots look more like CG than cel animation, which can be distracting. The brief flickers of simpler artwork to accentuate certain action-packed moments also does feel rather on-the-nose. But overall, the film’s worth watching alone to see, and forgive the cliche, a comic book come alive.

What a delight! - Spider-Man: Into the Spider-Verse review by CB

Very funny (I was crying with laughter at one point when I saw it at the cinema), original, plenty of surprises, and it has a big heart . I enjoyed the second viewing almost as much as the first at the cinema.

A difficult watch - Spider-Man: Into the Spider-Verse review by CF

My brain couldn’t deal with this film. I lasted 20 minutes and then I just couldn’t ignore the headache. The animation style and analglyph type backgrounds made it impossible to watch. That combined with the 12.5 frames per second animation killed it for me. Shame as the story looked interesting.

Spider-Man: Into the Spider-Verse review by Mark McPherson - Cinema Paradiso

I’m sure they’ll be much scoffing in my declaration of Spider-Man: Into the Spider-Verse as the best superhero and animation film of 2018. In a year with superhero films that challenge colonialism (Black Panther) and the traditional writing structure (Avengers: Infinity War), yes, I’m choosing the animated Spider-Man movie. This is not out of spite or preference. I’ve never been a big Marvel guy and am very adrift when it comes to Spider-Man lore. But Into the Spider-Verse manages to not only play well with the character’s lore and have fun with the genre but also serve up a heartfelt tale of identity and tragedy, amid all its goofy superhero antics. It’s the Marvel movie that can have its cake and eat it too.

I’ll address the story in a moment but first, let me gush about this film’s astoundingly different animation style. The trio of directors on this project have pushed the medium of computer animation to boldest of heights with how experimental this film gets. Notice how instead of blurring the depth of field there’s a bleeding of color and layers that create this oddly surreal and unique approach to backgrounds. You’ll also notice pointillism for shading, action lines for spider senses, and a uniquely cel-shaded look to the characters that look as though they came right off the page with the outlining ink still intact. And that’s just in the hero’s own world alone, not counting the merging of 2D and exaggerated characters he’ll meet.

But who is our hero? While Peter Parker (Chris Pine) is present, it’s ultimately Miles Morales (Shameik Moore) that will become the new Spider-Man. He doesn’t want to be though; he’d much rather be an average high schooler who does street art, opposing his father’s wishes of him going to a proper school and not getting involved with his dangerous uncle. But with the first Spider-Man out of action, Miles has no choice. He needs to stop the evil Kingpin (Liev Schreiber) from destroying New York City and he’s running out of time.

Fortunately, there’s another Peter Parker (Jake Johnson) on hand to help Miles. Unfortunately, he’s not a great Spider-Man tutor, having gone to pieces when his failures at relationships and finances led him down a road to depression. Not the best teacher but the two don’t have a choice if they want to save New York. They’ll still get some additional help from other spider heroes, including Spider-Woman (Hailee Steinfeld), Spider-Noir (Nicolas Cage), Penni Parker, and Spider-Ham.

With so many different characters, experimental styles, and comedy that ranges from satire to fourth-wall breaking, this film could’ve easily fit snuggly into the spot of softened animated superhero films of The LEGO Batman Movie and Teen Titans Go To The Movies. But, no, Spider-Verse takes itself earnestly enough that it can not only deliver a believable Spider-Man story on par with its live-action counterparts but hit higher as well. Part of the Spider-Man mythos is realizing you can’t save everyone which means tragedy will strike in Miles’ life and when it hits him it hits hard.

Into the Spider-Verse is far too ambitious, vivid, hilarious, and bold to ever be discounted as just the animated Spider-Man movie. It’s brimming and overflowing with ideas for its animation and strong themes of identity that resonate here are far better than any other Spider-Man movie. When a film can feature a cartoony pig delivering the most dramatic of lines and you buy into its somberness, you know you’re dealing with a film that can compete with the big boys of Black Panther and Avengers: Infinity War.