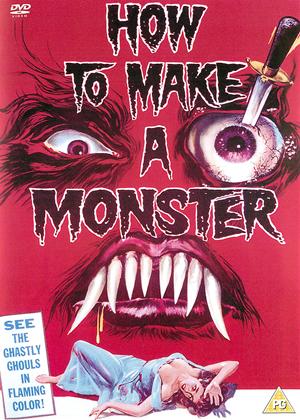 Rent other films like How to Make a Monster

Reviews (1) of How to Make a Monster

A movie with a plot as goofy as this one has ought to be a riot, but in the sort of rôle Vincent Price or Boris Karloff could really have sunk their teeth into, Robert H. Harris is basically Donald Pleasance without the talent, and bumbles through most of this sub-B-picture like that uncle everyone says is nice but you get the feeling you probably shouldn't ask him to babysit. Talking of lack of talent, halfway through the film, everything stops while we're subjected to an atrocious and irrelevant song and dance routine, featuring some kid who tries so very, very hard to be Elvis that I almost felt sorry for him. Almost.

I suppose it's an ingenious ruse for the permanently cash-strapped American International Pictures to use their own studio as the main set, and recycle two fairly successful monsters from recent movies in such a way as to be able to blatantly advertise both those films throughout this one. Unfortunately, the completely bonkers plot - an embittered monster makeup expert uses mind-control foundation cream he just happens to have invented for no reason at all to turn actors into killers - would only work if this film was either an outright spoof, or had been made by someone like Ed Wood who was prepared to go completely over the top with a perfectly straight face. What we get is a monster movie in which the actors don't have to wear their monster makeup all that often, and when they do, they're hardly ever doing anything monstrous, because that would be too expensive. The giveaway is the scene where the film-within-the-film is shooting a titanic battle between Teenage Frankenstein and Teenage Werewolf, and we get to see precisely one second of it!

A cast of nobodies who mostly can't act and lackluster direction make the whole movie feel very flat, and the enormous amount of padding doesn't help. For example, the lengthy interrogation by not very bright cops of a boring character to establish why he didn't hear somebody being murdered, when we already know it was because the guy was sitting in another building hundreds of yards away listening to the radio, and this has nothing to do with anything. It does liven up a bit at the end, when, after a whole hour shot in black and white to save money, suddenly it's in color! And suddenly Robert H. Harris thinks he's Vincent Price in "The House Of Wax"! Of course, he's sadly mistaken, but all those monster props from much better B-movies hanging on the wall are fun to see in color. I always assumed the aliens in "The Invasion Of The Saucer Men" were green, but it turns out they're orange. Which sums up the why this movie is a damp squib. If the best part of a film is spotting all the things left over from other films that keep turning up in it, you're far better off watching those films instead.