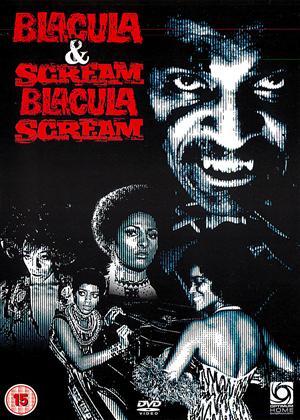 Synopsis:
Urban action and fatal attraction give rise to a groove from beyond the grave in this funkadelic, fangadelic Soul Cinema sensation! The eternally cool William Marshall puts a fresh spin on the age-old legend of the vampire, condemned to wander the earth with an insatiable lust for blood.

Sign up
Count Yorga, Vampire / The Return of Count Yorga

This two-film franchise tends to be dismissed as a joke because of Blacula's name, but, like "Dr. Jekyll & Sister Hyde", a ludicrous title unfairly detracts from a surprisingly good film. The best thing about it by far is William Marshall, who I wish had been lent to Hammer to co-star with Christopher Lee, since he's the only screen vampire of the seventies who had the same dark charisma and feral intensity as Lee's Count, and in a showdown between those two it's anybody's guess who'd win. In fact, along with Lee's Dracula and Max Shreck's Count Orlok from "Nosferatu", Marshall's Blacula might just be one of the top three cinematic vampires of all time.

Though strictly speaking he's a bit of a movie monster mash-up. Of course he's a vampire, but he's also got elements of the werewolf, in that unlike Dracula he's a good man cursed through no fault of his own with an evil secondary personality he can't control who desperately wants to be cured if it's possible, which is a major sub-plot in the second film. And he's very like the mummy as well, since after being buried for centuries he's barely had time to find out what year it is now before he runs into some girl who just happens to be either the exact double of his long-lost love or her actual reincarnation, so his primary motivation is tragic romance rather than simply biting people 'cos he's evil.

It's not without its flaws, including some very peculiar vampire makeup. Bringing undead pallor to the skins of a mostly black cast obviously set the makeup man a huge challenge, but he really shouldn't have saved money by using the same batch on the white vampires, on whom it's so excessive that they look like zombies in a home movie George Romero made when he was 13. And the inevitably schizoid results of mashing up gothic horror with blaxploitation mean that the scenes in which everybody is being very seventies and very black tend to have not much to do with vampires, while in the scariest and goriest supernatural scenes the actors' ethnicity is mostly irrelevant. But it compares very favourably indeed with Hammer's attempt to do something similar in the awful "Dracula AD 1972", where the poor old Count looks utterly lost, and as sick of it all as Christopher Lee really was by then. Whereas Blacula can walk into a Harlem nightclub wearing a tuxedo and an opera cape and still be by far the coolest person in the room, thanks to the extraordinary screen presence of William Marshall, who in his less feral scenes reminded me a lot of James Mason.

Overall, it's a rather silly but satisfactorily bloody and sometimes genuinely creepy horror double bill that has the wisdom not to try too hard to be anything other than trash (it was after all made by AIP, whose most prolific in-house director was Roger Corman), yet manages to be very good trash indeed thanks to a superb central performance from an actor who must have been horribly typecast by these two films otherwise I'm sure we'd have a seen a lot more of him in less bizarre rôles. And since it was made almost half a century ago, the stereotypical soundtrack it has to have because it's about black people consists of disco and funk, not the hideous din we'd be forced to endure nowadays.

In the opening to this film, William Marshall as Prince Mamuwalde visits Charles Macaulay’s impressive Count Dracula about suppressing the slave trade. Dracula is more interested in Mamuwalde’s wife Luva (Vonetta McGee), and when his advances are spurned, sentences Mamuwalde to vampirism and death to Luva. With a film entitled ‘Blacula’, and the mantle of ‘blaxploitation’ regularly directed at it, this kind of serious and violent opening was not what I expected. Only after the credits, and when things move from 1780 to the (then) present day, do we enter more familiar, somewhat expected territory.

William Marshall is EXCELLENT as the noble vampire. Literally towering above everyone else, he exudes charm, melancholy and – despite some over-the-top vampire make-up – rage and terror. Yet he resists the temptation overplay anything, something other Draculas could not manage. His attraction to the character Tina Williams is played absolutely for real and the audience is completely on their side, despite the growing number of vampiric ‘deaths’.

As with Blacula himself, the make-up on the vampires is (probably deliberately) heavy-handed, making them appear as green-tinged zombie-types when they could have been terrifying. But is that the aim of the film? Probably not – this prefers to settle for being a compelling supernatural comedy/thriller (although very much ‘of its time, the humour is held pretty firmly in check throughout) that aims to entertain, which it does.

Having said that, a few deaths stray happily into ‘shock’ territory, not least Blacula’s climactic demise. We aren’t glad to see the back of the reign of a tyrant, or even the killer he is, but rather sad, admiring of his nobility. One of my favourite Dracula actors. This is a fine film lifted by Marshall’s consistently brilliant performance. Luckily ‘Scream Blacula Scream’ was released a year later, presumably resurrecting Marshall’s character.