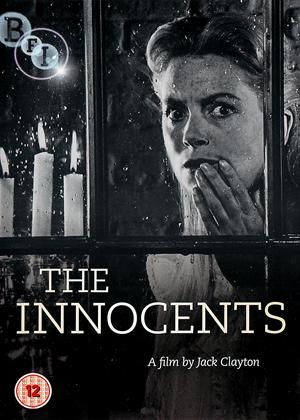 Synopsis:
Deborah Kerr (in the performance of her career) plays the emotionally repressed vicar's daughter who takes up a job as a governess to two seemingly angelic orphans. Gradually coming to believe that the children are possessed by the perverse spirits of their former governess and her sadistic lover, she begins to see manifestations of the ghosts prowling the huge gothic mansion of Bly House. Director Jack Clayton sustains a superbly haunting atmosphere throughout the film, and like James' original work, cleverly retains the ambiguity of wether the ghosts are real or the products of the governess's fevered imagination.
Aided by Freddie Francis's exquisitely inventive and atmospheric CinemaScope photography, we, like the governess, are never quite sure what unspoken horrors are lurking beyond the edge of the frame and are kept guessing until the film's tragic conclusion.
Actors:
Deborah Kerr, Peter Wyngarde, Megs Jenkins, Michael Redgrave, Martin Stephens, Pamela Franklin, Clytie Jessop, Isla Cameron, Eric Woodburn
Directors:
Jack Clayton
Writers:
Henry James, John Mortimer
Studio:
BFI Video
Genres:
British Films, Classics, Horror
Countries:
UK

Reviews (3) of The Innocents

If you've seen 'The Others', then you see this film, you'll see where 'The Others' got all its ideas from. Brilliant writing - mostly by Truman Capote - and well-adapted from Henry James' classic Turning of the Screw, this film still has the ability to shock and scare.

This is probably the best horror film I have ever seen because there is much more than just horror. I was not drawn in at first because it seemed dated and unnecessarily upper class, but for the big house, creaky floored, evil servant atmosphere it has to be like this. The direction would have been outstanding in any era but startlingly good for 1961. The acting is also strangely untheatrical. My slightest criticism would be that the balance of "is she mad or are they evil" was too close and I was unsure in the final scene which to believe. The other thing is that I am not a great horror fan. If you are this is easily a 5 star.

The nasty blood-red delights of Hammer films a few years before had instantly rendered horror adaptions like this somewhat genteel (which is one alleged reason why Hammer themselves slid out of favour about a decade later). Indeed, one of the joys of this 20th Century Fox production is the glimpse it shares of another, softer world - a world of crisp manners, phrases like 'stuff and nonsense', elegant houses and rolling summer gardens. Not a tracksuit or a gold chain in sight.

Away from this fond reminiscing, 'The Innocents' is a terrific and beautifully acted horror story about two demonic children. And yet the youngsters, so well-played by Martin Stephens (as Miles) and Pamela Franklin (as Flora), may be somewhat mannered, but never brattish as young performances can be (relentlessly chirpy, if anything). Deborah Kerr (as naïve Miss Giddens) and Megs Jenkins (Mrs Grose) are wonderful as the two extremely well-meaning women placed in charge of the juveniles, who gradually, are revealed to possess extraordinary perceptive powers. Peter Wyngarde, the unofficial face of the late 1960s, is unnerving as the sombre Peter Quint.

Director Jack Clayton and cinematographer Freddie Francis extol the virtues of the black-and-white world and pack each scene with detail of comfort and splendour, only to offshoot them with moments of increasing unease.