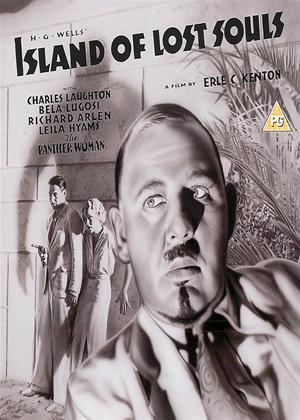 Reviews (2) of Island of Lost Souls

"Are we not men?" - Island of Lost Souls review by Count Otto Black

Well, let's see now. This is a fairly low-budget horror film over 80 years old, so you can safely assume that any sex and violence is pretty much non-existent, and the reason it was banned for decades in the UK had more to do with our draconian censorship laws than anything truly offensive about the film. You can also take it as read that the special effects are very crude indeed. H. G. Wells, the author of "The Island Of Dr. Moreau", on which it was closely based, publicly disowned it. And both modern remakes, bizarrely starring Burt Lancaster and Marlon Brando respectively, were unmitigated disasters. So this film has to be terrible, right?

Actually, it's an incredibly atmospheric minor masterpiece. Bela Lugosi has a very small part but he was seldom better, and fans of Devo will enjoy seeing where that "Are we not men?" quote came from. The hero is, inevitably for this era, blandly forgettable, but Charles Laughton is simply fantastic as a mad scientist who for once doesn't overact but is still very mad indeed, in the rôle you'd think Bela would have gotten. And he really sells a horribly crazy character who has no idea there's anything wrong with doing ghastly, pointless things to helpless animals just because he can. He's the best kind of movie villain - you utterly detest him because any sane person would, but you're still fascinated by him. And what ultimately happens to him - the scene that got the film banned in the UK - is implied rather than shown, but it still packs a real punch.

Just about the only thing wrong with it is that they didn't go with the mind-bendingly surreal makeup designs still photos of which are included in the DVD extras. Oh, and this being 1932, Lota the Panther Woman's rampant animal sexuality, supposedly a crucial plot-point, has to be so downplayed that she might as well be a slightly troubled nun. But overall, as vintage horror classics go, it's up there with "The Bride Of Frankenstein", and far better than the Lugosi version of "Dracula". As a bonus, real movie buffs can have fun spotting obscure young actors who weren't famous yet slumming it as Beast Men - Randolph Scott is easy to identify, but good luck finding Alan Ladd!

Oh, by the way, the photo at the top of this page is of Frederick March in the 1931 version of "Dr. Jekyll And Mr. Hyde", and has no connection whatsoever with this film.

After Universal scored such hits with ‘Dracula’ and ‘Frankenstein’ in 1931, it was clear that horrifying audiences was big business. Amongst the steady stream of cinematic terrors that followed, a year later Paramount brought us swathes of monstrosities courtesy of HG Wells and his insane Doctor Moreau.

The make-up for the ‘lost souls’ is very impressive on the more subtle mutations, but less so on the more ‘advanced’ experiments. Which brings us to the most vocal, The Sayer of the Law, played by Bela ‘Dracula’ Lugosi (as he is billed, just above ‘The Panther Woman’). Covered in fur, this is the actor that, a year earlier, had supposedly turned down the Frankenstein Monster for fear the make-up would obscure his matinee looks (which is given as one of a number of reasons he didn’t end up playing the role despite being touted for it). The Sayer of the Law would seem to debunk that particular theory.

Lota, the Panther Woman herself, is played very appealingly by Kathleen Burke in an outfit that exposes a lot of flesh for the time. Her growing relationship with Richard Arlen as Parker – a hero not quite as overshadowed by the other characters as is usual in horror films from this era – is interesting, but causes problems when his girl Ruth (Leila Hyams) travels all the way to the remote island to look for him.

Finally, what an actor Charles Laughton was. Whilst time has rendered the performances of some of the actors around him dated and theatrical, Laughton’s Moreau is every bit as convincing and villainous in 2017 as he was 85 years ago. Superbly spoken but dripping with malice, or uncontrolled and snarling like one of his own animalistic experiments, he is compelling at all times. Moreau’s ultimate fate is one of the most unpleasant you could imagine, but horribly satisfying too.

This is a mighty slice of grim and effective cinema. We could smile at some of the quaint make-up effects of course, but Director Erle C Kenton is at his creative peak here. He would go on to direct future Universal horrors, but never does he imbue them with the sense of unease and danger as is on show here. Strange, leering faces loom of out the jungle, misshapen shapes move in the shadows, revealing deformed limbs – or in one case, a solitary hoof – although we are fairly sure that their animalistic fury is directed only at those responsible for their current predicaments.