Rent Dracula Has Risen from the Grave (1968) 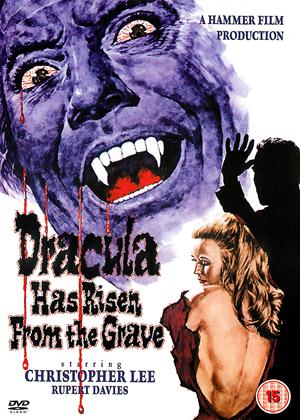 Reviews (1) of Dracula Has Risen from the Grave

Spoilers ... - Dracula Has Risen from the Grave review by NP

This is Sir Christopher Lee’s third outing as Dracula, and this time he has some dialogue. Already the character is far more effective here than in his last appearance, despite not being directed by the poetically-inclined Terry Fisher. Instead, Freddie Francis is at the helm, and marks his territory with heavy use of toned camera filters framing certain scenes that enliven the sometimes drab greys of the sets.

To once again make up for the lack of Peter Cushing as Dracula’s sworn enemy Van Helsing, we have two heroic types. Monsignor Ernest Mueller (Rupert Davies) is the man with the relevant vampiric experience, and to take on the brawnier side of things is Paul (Barry Andrews). For the young hero to be a hot-headed atheist is an interesting departure (even if such a development makes the character somewhat arrogant and hard to like), and also reveals that you cannot successfully stake a vampire without believing in the powers of good. I like this idea. It provides a nicely grisly scene when Dracula is staked but refuses to die. Lee, who made something of a habit of publically lambasting these films, felt this went against the wishes of Bram Stoker – but there’s no denying the impotent staking is one of the highpoints of the picture.

As the title suggests, blood plays a big – if fairly impractical – part in proceedings here. Who would have thought that that gash on the fallen priest’s head (Ewan Cooper) would produce a trail of the red stuff that should trickle down a rockface and into the very mouth of the Count to resuscitate him? Perhaps it is Dracula’s inexplicable will that this should occur. Also, the first time we see Dracula is in a reflection, despite the fact that vampires cast no reflection.

Despite these flaws, this is an entertaining film, from its psychedelic opening titles to the (somewhat implausible) revelation of a drained girl stuffed into a church bell, and especially the impressive rooftop scenes which muster up the dreamy atmospherics Terry Fisher favoured. The casting is good; Veronica Carlson’s debut is delightful as the somewhat chaste Maria, as is Barbara Ewing as the more worldly-wise and therefore doomed Zena.