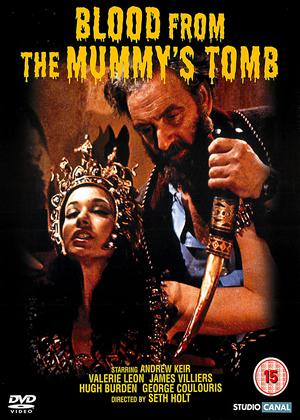 Synopsis:
The evil begins when professor Julian Fuchs (Andrew Keir) and his expedition team, discover in Egypt, after years of quest, the tomb of Queen Tera (Valerie Leon). The Queen is a beautiful creature, naked save for the tapestry of wonderful jewels that decorate her body. Legend suggests that Tera, Queen of Darkness, was murdered by Egyptian priests, and that she has mysterious powers from beyond the grave...The opening of the tomb has a strange effect on Fuchs and his team. Are they aware of the powers they are unleashing when they return to England with the mummy and her strange artefacts?
Actors:
Andrew Keir, Valerie Leon, James Villiers, Hugh Burden, George Coulouris, Mark Edwards, Rosalie Crutchley, Aubrey Morris, David Markham, Joan Young, James Cossins, David Jackson, Jonathan Burn, Graham James, Tamara Ustinov, Penelope Holt, Angela Ginders, Tex Fuller, Luis Madina, Omar Amoodi
Directors:
Seth Holt, Michael Carreras
Producers:
Howard Brandy
Voiced By:
Olive Gregg
Writers:
Christopher Wicking, Bram Stoker
Studio:
Warner
Genres:
Classics, Horror

Reviews (2) of Blood from the Mummy's Tomb

"Dracula" is, if you count all the very loose adaptations, by far the most-filmed novel ever written, so it's not surprising that movie studios sometimes get it into their heads to film something else by Bram Stoker, only to find he wrote exactly one book that makes a good movie (though Ken Russell came closest when he turned "The Lair of the White Worm" into a completely bonkers parody which still manages to make more sense than its source novel). "The Jewel of Seven Stars" hovers on the edge of filmworthiness, so once in a while somebody has a crack at it. You may have seen a big-budget slab of tedium starring Charlton Heston called "The Awakening". This, believe it or not, is the previous attempt to film the same book. And it's a whole lot more fun!

An archaeologist excavates the tomb of Ancient Egyptian witch-queen Tera, discovering her body to be so well-preserved that it could almost be a scantily-clad actress trying not to breathe or twitch her eyelids, apart from that unfortunately missing right hand (don't worry, it'll turn up). At the exact moment that he opens Tera's sarcophagus, thousands of miles away in London, his daughter is born, dies, and immediately returns to life. Can you guess who she grows up to precisely resemble...?

With a plot that obvious from the get-go, no real suspense is possible, so most of the cast have to spend the whole film darkly hinting at things almost everybody else already knows, before getting the gorily torn-out throat that the Mummy's Curse inflicts on just about everyone, whether the actual cause of death logically ought to tear their throat out or not. In a blatant nod to Renfield from "Dracula", one character is shut up in a mental hospital that makes the one in "Terminator II" look humane. Another does fraudulent psychic card-readings just to add color to the proceedings. Many characters are oddly camp, including a screamingly gay man who appears briefly for no discernible reason before literally running out of the movie never to return.

And at the heart of it all, Valerie Leon, in yet another example of Hammer's splendid tradition of casting women in difficult twin rôles as naïve innocents and monstrous avatars of undying evil because they have large breasts and taking it on trust that they can act, displays so much cleavage she has to make an in-character joke about it, along with all the acting talent she brought to bit-parts in several "Carry On" films and a series of adverts for Hai Karate aftershave (which was basically bottled essence of Alan Partridge). Of course, it didn't help the overall coherence of the movie that Peter Cushing had to be replaced on the second day of shooting because his wife was dying, and then 47-year-old director Seth Holt unexpectedly dropped dead in mid-production.

This is one of Hammer's strangest films, with nightmare logic trapping all the protagonists in easily escapable peril which eventually gets them anyway, such as the woman who is somehow mauled to death by a small and totally immobile statue she has kept in her home for over 20 years despite knowing it was incredibly evil and dangerous. On almost every conventional level it fails completely, yet it's so odd it sort of works as an unintentionally surreal semi-spoof. And if there was one, it would definitely win the Oscar for Most Scantily Wrapped Mummy.

Spoilers follow ... - Blood from the Mummy's Tomb review by NP

Events behind the scenes during the production of this Hammer project contain enough tragedy and intrigue to make a film of their own. Andrew Keir plays a role originally written (and partially recorded) for Peter Cushing, who had to abandon the project when his wife’s health took a turn for the worst. Director Seth Holt died on set mid-way through production and Hammer bigwig Michael Carreras took the helm for the remainder (although Holt was still singularly credited).

The result is sadly a bit of a mess, frankly. Much of the initial running time is filled with a flurry of characters experiencing strange and deadly events/coincidences often vaguely connected with a singular star system (‘The Jewel of the Seven Stars’ is the Bram Stoker story on which this is based). A pout-some, voluptuous and fully made-up Margaret is in bed dreaming of a pout-some, voluptuous and fully made-up Egyptian queen Tera (both played by Valerie Leon) having her hand removed by a group of priests. In more wakeful times, Margaret has a father (Keir) and a boyfriend, charmless Tod (Browning, believe it or not – namesake of the man who directed 1931’s ‘Dracula’ and 1932’s notorious ‘Freaks’ among others – played by Mark Edwards). There’s creepy Corbeck (James Villiers), mad old Berigan (George Coulouris) and even madder Doctor Putman (Aubrey Woods). The least interesting Browning commands much of the running time leaving much of the rest of the cast under-written.

‘Blood from the Mummy’s Tomb’ eschews much blood and gore (and a traditional mummy) in favour of a more supernatural tale. That it is rather dull and talky doesn’t help anyone: the most gruesome thing we see is Princess Tera’s disembodied hand creeping around. It is admirable to see Hammer attempting a different telling of the story, but sadly this fails to deliver much in the way of horror.