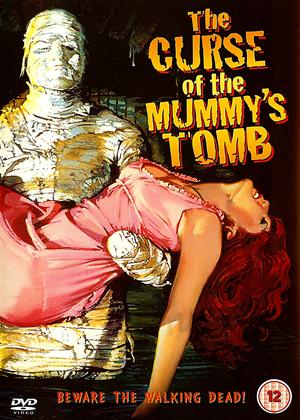 Rent other films like The Curse of the Mummy's Tomb

Reviews (2) of The Curse of the Mummy's Tomb

Spoilers follow ... - The Curse of the Mummy's Tomb review by NP

Produced and directed by Hammer executive Michael Carreras, this film opens up in classic low-budget style: footage of camels tearing across a real desert fade into close-ups of blacked-up actors in a studio set, where the elderly father of drippy, fickle-hearted heroine Annette Dubois (Jeanne Roland) is killed and has his hand removed by ruffians. Carreras also wrote this under the pseudonym Henry Younger.

‘The Curse…’ has not found a huge amount of favour from fans over the years, but I really like it. Apart from the opening sequence, it looks to be an expensive production, features a first rate cast, features some gruesome moments – and features Michael Ripper as a wonderful (if unlikely) wide-eyed Arab called Achmed.

George Pastell makes an appearance, the second cast member from Hammer’s original Mummy film to appear here. Fred Clarke, renowned American comic actor, plays the larger than life Alexander King (who, it seems, invented the term Turkish Delight in this film) arrogantly determined to milk as much money from the Mummy as possible, but lives (or dies) to regret it. Jack Gwillim is very good as pickled, deflated Sir Giles Dalrymple (whose demise is the film’s highpoint in my view), whilst underrated actor Terence Morgan excels as villainous and debonair Adam Beauchamp, who is more interesting than stuffy square jawed hero John Bray (Ronald Howard).

The Mummy (Dickie Owen) is a curio. He seems slight compared with the usual culprits, and has a clay-like face, giving him a Golem-like aspect. But he is directed very well, and his kills are often accompanied by nothing but the sound of his deep, rhythmical breathing, which makes up for his less than intimidating bearing.

It is true to say that the story takes a while to get going, but is a solid telling of typical Mummy revenge, and certainly livens up once the resurrected Ra-Antef begins his killing spree, and remains compelling until the exciting sewer-based finale, in which Beauchamp is also relieved of his hand.

Just like Universal, Hammer had an unfortunate tendency to run their monster franchises into the ground, and here we see the poor old mummy in its second Hammer outing already in trouble, because how many possible plots are there in which a dead Egyptian lumbers around killing archaeologists? Doubtless that's why Hammer's fourth and last mummy picture, "Blood From The Mummy's Tomb", took a completely different approach to the subject. This retread of the tired old tale has exactly one original element (which it would be a plot-spoiler to reveal), and that's nowhere near enough.

There's a can't-be-bothered feeling about the whole affair. The first film starred Christopher Lee as a very impressive mummy and Peter Cushing as its main antagonist, but there are no horror heavyweights in this cast of second- and third-stringers. Jeanne Roland gets the dreaded "and introducing..." credit, and sure enough, she's awful as the love-interest, though it's not entirely her fault, since although her character's nationality has no bearing whatsoever on the plot, she's given a dubbed French accent that would make Inspector Clouseau blush (she went on to have bit-parts in a couple of Bond films and hasn't acted since 1969).

Somebody plays the boring, wooden hero. Somebody else plays the mummy, squinting through a crude mask and bringing none of the pathos to the part that Christopher Lee managed to in 1959. And almost everyone else is somewhere between adequate and terrible. To be fair, Terence Morgan is quite good as the charming sophisticate who sometimes gets oddly intense when the conversation turns to mummies, but I couldn't help thinking how much better Christopher Lee would have been. I'm sure he wouldn't have objected to being in another mummy movie if this time somebody else wore the bandages, but he was probably too expensive.

Everything about this film is cheap. Apart from a few seconds of grainy stock-footage, every "outdoor" scene takes place in a rather small studio. Flashbacks to Ancient Egypt avoid showing us any buildings other than one medium-sized tent. In the first film, the mummy's indestructibility was demonstrated by bullets and even a harpoon going right through it leaving gaping holes, which it casually ignored. This time, point-blank gunfire has no effect at all, though you'll notice that in the scenes where it's shot at, the mummy has a patch of cloth on its chest which doesn't match and keeps changing shape, so I'm guessing there was supposed to be a special effect there, but it looked so crummy they had to cut it. And since every genuinely gory moment in the movie (all three of them) involves a hand being cut off, it's pretty obvious they had to use whatever was in the prop cupboard at the time, and it happened to be a rubber hand. There's even a shot where two extras pretend to be statues because they couldn't afford real ones!

Worst of all, it's tedious. Two-thirds of the movie elapse before the mummy comes to life, and nearly all of that time is devoted to people who are mostly uninteresting or downright annoying falling in love, arguing, or talking at length about the stuff we're waiting to see actually happen. And as for motivation, some of these characters behave in such a muddled and illogical manner it looks as though the writers didn't care whether the script made sense because they knew no-one else would. For real high-class Hammer mummy action, watch the 1959 film with Christopher Lee (to which this is not a sequel - it's a different mummy).