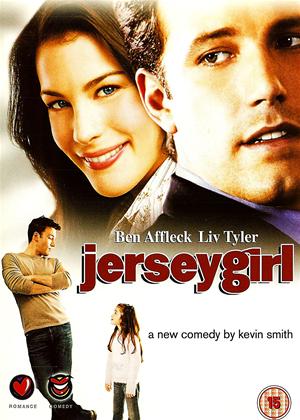 Synopsis:
Hollywood favourites Ben Affleck [Daredevill Paycheck, The Sum Of All fears) and Liv Tyler (The Lord Of The Rings trilogy, Armageddon) shine in this heartwarming all-star comedy about a guy who thinks he's lost it all only to discover he's got everything he needs! Ollie (Affleck) is a smooth and successful big-city publicist who has the life he's always wanted - until things take an unexpected turn and he finds himself an unemployed single father back living with his dad in the suburbs.
But just when he thinks his life has hit bottom, a sexy, no-nonsense video store clerk (Tyler) enters his life and shows Ollie that sometimes you have to forget who you thought you were and acknowledge what really makes you happy. Also starring Jason Biggs (American Pie) - director Kevin Smith (Jay And Silent Bob Strike Back) has delivered another hit critics calling one of the year's funniest.
Actors:
Ben Affleck, Liv Tyler, Raquel Castro, Betty Aberlin, Matt McFarland, Sarah Stafford, Paulie Litt, Christian Fan, Victor Chavez, William Mace, Jennifer Schwalbach Smith, Jennifer Lopez, George Carlin, Stephen Root, Mike Starr, S. Epatha Merkerson
Directors:
Kevin Smith
Writers:
Kevin Smith
Studio:
Miramax
Genres:
Romance

If you’ve never heard of Kevin Smith before then Jersey Girl is an enjoyable easy going movie and well worth renting. However, if you’re a fan of Kevin Smith and thinking of renting Jersey Girl purely on the merit of Smiths’ past efforts, then read on before clicking on the rent button. If you’re expecting smart, snappy and thought provoking dialogue, satire of taboo subject matter, unconventional storylines and laughs along the way… forget it. Jersey Girl is none of the above. Kevin Smith has made a mainstream movie but played it way too safe. It’s almost is if he’s had a creativity bypass, didn't want to take any risks and instead made a John Hughes tribute movie, in the same vein as Curly Sue. And why? Smith is perfectly capable of stamping his own style on realistic stories. Take a film like Chasing Amy, which has arguably no more adventurous a plot than 'boy meets girl, boy gets girl, boy loses girl.' However, in Chasing Amy, Smith uses his special blend of off-beat characters, clever humor, and engaging dialogue to turn a simple romantic comedy into a complex, intelligent, and very original take on love, friendship, and the wages of jealousy. Jersey Girl however, is pure Disney style one dimensional sentiment. ‘Man falls in love, marries, has child, loses wife, stuck with child, loses job and has to make that difficult career V’s child choice. And like all good generic Disney Style movies there’s always a happy ending. As far as Affleck goes, as he proved in previous Smith outings Chasing Amy and Dogma, he can act if given the tools to do so. But with tame predictable dialogue he struggles and it shows. If this was credited to any other writer and director then it would be at best a pretty average though enjoyable movie. But it’s not… it’s written and directed by the man that brought us Clerks, Chasing Amy and Dogma… and we all know he should be making far better movies than this.