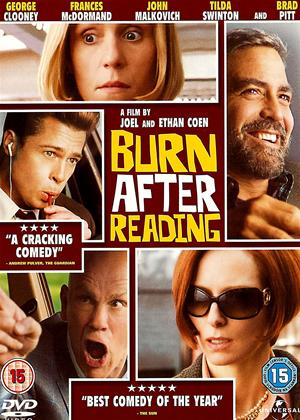 Reviews (12) of Burn After Reading

"Burn this film before watching"

It was one of the worst films I have watched in a long long time.

Despite being a Coen brothers fan, I thought I must have somehow missed seeing this when in came out 8 years ago. But as I started watching, it felt oddly familiar. It gradually dawned on me that I'd seen it after all, but I couldn't remember a thing about it. It's very unusual indeed for me to completely forget a film. Unfortunately, having watched it again, I can understand why I found it so forgettable the first time round.

This is an attempt to recapture the magic of "The Big Lebowski" by recycling its essential themes and plot elements. Misguided people with strange, obsessive agendas pursue a MacGuffin they think, wrongly, is valuable, and the production team assume that much hilarity will ensue. One scene from "The Big Lebowski" involving a very minor character is repeated almost exactly, and the same menacing music (from Mussorgsky's "Pictures at an Exhibition") that accompanies Jeff Lebowski's landlord's dance is heard when somebody's call is put on hold, just to tip us the wink. But this time round, everything falls embarrassingly flat.

Almost all the characters are horrible, shallow people obsessed with their outward appearances because there's nothing really going on inside them, whose numerous sexual entanglements are so joylessly robotic that one of them has even built a huge and extraordinarily creepy mechanical sex-toy just so we don't miss the point of that subtle bit of satire. With a mean-spiritedness which has become more and more apparent in their later work, the Coens show us nasty people motivated entirely by greed, lust, vanity and spite being nasty to each other, decide more or less randomly which of them will get away with it, mete out ghastly fates to those who don't, and introduce one token character with finer qualities just to be dumped on because hey, life isn't fair, even in comedies!

Several excellent actors are underused in multiple subplots which never properly cohere. Tilda Swinton in particular has absolutely nothing to do except be so unpleasant that it's impossible to understand why two other people in the movie find her attractive. John Malkovich is his usual irrepressible self, but he interacts so little with the main protagonists that he's barely in the same film. George Clooney is cast against type as a charmless creep, which kind of defeats the object of hiring George Clooney. And Brad Pitt is annoyingly unfunny as a man-child with the IQ of live yoghurt. The jokes don't work, you don't care about the characters, and the plot exposition is lazy and confusing, as if even Joel and Ethan Coen had begun to lose interest before they'd finished filming. It wouldn't even deserve two stars if it wasn't for some of the acting. Definitely one to file and forget.

burn before watching.... - Burn After Reading review by CD

Totally dire, not funny in any way, shape or form. Thought that a couple of big name actors would not sign up for a film this bad, the script must have been dire as well, has to be on my worst film ever list!

Burn before viewing. - Burn After Reading review by LB

Oh really, this is so bad.

I really like the Coen Brothers output, but this? ...... this resembles a very poor attempt at farce by too-smart American film students, not the champions of left-field quirk.

Seriously, I've seen 'Carry-On' films do farce better - and with more depth and characterisation too.

Such a shame. I thought some of the actors did a decent job - I actually loved Brad Pitt, so far out of his usual field, Frances McDormand was great, John Malkovich supremely brilliant..... but there was just nothing there.

I reached the end and thought: "Oh"

Yeah yeah, I 'got' the references, I 'got' the (attempted) satire...... but sometimes we have to just accept that some great film makers create some really poor work. This is so for the Coen Brothers.

'Emperors new clothes' came to mind when I read some reviews post-viewing.

Two stars because I don't think all of the cast did a bad job, they were just given a clumsy, empty, characterless script.

Burn After Reading is very much a comedy that only the Coen Brothers would set out to make and deliver. At times it is too smart and pretentious for its own good, but there are flashes of brilliance amidst the pedestrian directing and stale American environments.

John Malkovich and Tilda Swinton both excel in their roles as the hard-nosed couple from hell. Their relationship is far from perfect yet by the end of the film you know they are ideally suited. Those expecting a Brad Pitt vehicle will be disappointed, but for those of us following the Coen’s trail, it is another enjoyable if slightly haphazard offbeat experience.

After No Country For Old Men, arguably the only way is down, yet this is a modest dip in quality. While I still had some questions at the end about what happened to a couple of characters, it is a fun, intelligent and humorous 96 minutes in a sea of rude comedies that grace our theatres nowadays.

please dont waste 92 mns of your life watching this its absolute rubbish it really is...was waiting for something to really happen and the ending well the less said about that the better

Read the reviews - it'll save you time. - Burn After Reading review by Karrie

Believe the three reviews Burn before Viewing, Burn After Reading and Forget after Viewing.

Rare I don't like a film, I love slow enigmatic films and dry comedy. Despite enjoying the perfomances of the main actors ( John Malkovitch being very John Malkovitch, Tilda Swinton being great as ever, Frances McDormand's self-obsessive, Brad Pitt as an amazingly cringy youth and George Cluney being really creepy) - it was dire: the whole family thought so.

A potentially hilarious storyline and characters, missing most of its targets.

Love it! - Burn After Reading review by GB

We saw it the other week and have ordered it again. Seem to be swimming against the tide here but my wife and I loved this. Crazy plot, crazy characters and worth renting for Brad Pitts character alone.

Heard alot of great things about this film. The trailer looked good too.

Dont waste a rental... Could the story be any slower. unlike the Coen brothers previous films I did not find it remotely funny - just rather sad especially George Clooney and Brad Pitt what were they thinking staring in this?

Disappointing despite a great cast. - Burn After Reading review by CP Customer

I'm a fan of the Coen brothers earlier films, but since 2001's 'The Man Who Wasn't There' everything they seem to have done since has been way below their usual high standard. 'No Country For Old Men' was a brilliant return to form but 'Burn After Reading' for me was decidedly average, not as bad as 'Intolerable Cruelty' or their god awful remake of 'The Ladykillers' but pretty forgettable all the same.

My wife and i both enjoyed this film, but if your looking for it to make sense you will be disappointed. Much like real life people do stupid things, act irrationally and unpredictably.

The film captures this perfectly, humour for people with a brain.