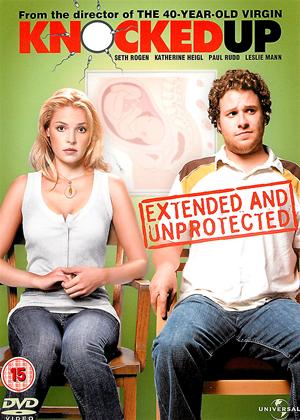 Reviews (7) of Knocked Up

Luke warm comedy - Knocked Up review by Tim from London

This is an overly long but not completely unfunny film that attempts to mesh together the rom-com and the 'gross out male humour' genres. There are some genuinely funny moments - especially where the girls try to get into a nightclub and meet a sensitive doorman who admits he really hates his job. However the film is let down by poor lead actors who, may be funny individually, fail to generate any on screen chemistry - and a tendency to try and disgiuse this by relying too much on crude adolescent humour at moments when it wasn't needed.

A not "hilarious" hit comedy. - Knocked Up review by CP Customer

Beware of claims made in the promotional spiel. a not particularly funny, imaginative or sensitive movie. The lead male looks unerringly like a young Rory McGrath, sadly the wit and timing of Rory is totally absent. The script is lame and resorts to loud repetative swearing whenever a 'crisis' occurs. Save your money for a genuine comedy.

A pleasant suprise! - Knocked Up review by CP Customer

I did not enjoy the 40 Year Old Virgin, all in all, I am not a fan of mainstream comedy, however, this was a pleasant surprise. Although it did contain crude comedy, the film also had a moral and it did not turn into the average idiot teen comedy that it so easily could have done. The actors are all comedy experts who know how to make an audience laugh. I do not recommend this film for someone wanting a simple rom-com as this has more to offer, on the other hand do not expect too much sentimentality or a complex romantic plot, it is a simple and clever comedy. Overall it is a good mix of guys comedy with the added sweetness of female humour all in all add up to an offbeat and interesting blend of humour and emotions.

A decent comedy drama. - Knocked Up review by CP Customer

This is more of a comedy drama than all out comedy, there are few laughs here and there and both Katherine Heigl and Seth Rogen do a good job. Running over two hours the film does feel a little too long but considering the story takes place over nine months it does pretty well to hold your attention throughout. If you enjoyed 'The 40 Year Old Virgin', 'Forgetting Sarah Marshall' and 'Dan In Real Life' then this is well worth renting.

Well, this has got to be the worst film I've seen for a good few years. It's not funny, the script and story are as dull as dishwater and the whole cast, apart from Katherine who just about holds onto her professional credibility, are under the illusion that what they are doing is so clever and interesting. Sadly, it is not. It's overlong, has totally unnecessary shots of childbirth (yeah the bit no-one wants to see), no laughs and I couldn't wait for it to end (in fact I wish I hadn't). Avoid this at all costs.

Not too cheesy Rom Com - Knocked Up review by CP Customer

I really enjoyed this film. I thought it was a great observation on relationships which wasn't just padded over like the usual romantic comedy.

Genuinely funny. Brilliant acting. A surprising thumbs firmly up from me.

Dreadful - Knocked Up review by MK

This is without a doubt, one of the worst movies I have ever seen. I am considering ending my friendship with the person who recommended it to me.