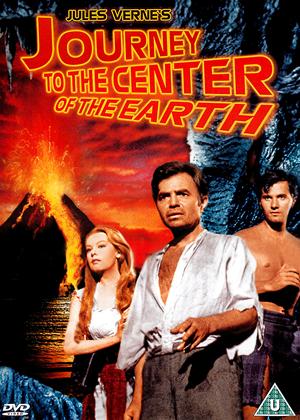 Rent other films like Journey to the Center of the Earth

Sign up
Harry Potter and the Chamber of Secrets

Reviews (1) of Journey to the Center of the Earth

I hadn't seen this movie before, even on TV - I've seen the 1970s version of the same Jules Verne book though which is totally different. I expect neither version sticks to the original book though.

It's basically an old-fashioned adventure story which, unlike any other film I have seen, manages to go to Iceland - filmed in a US national park - where a volcano will lead to the centre of the earth.

Of course, there's a baddie or two - antagonist to the protagonist - and some supposedly scary bits.

I have seen clips from this movie before - the scenes of the dinosaurs. Or lizards with stuck-on fins (hope the glue came off). At the same time this was being made, Ray Harryhausen was experimenting with his stop-motion, which has much more charm that slowed down footage of abused lizards really.

A real curiosity piece and with singer Pat Boone starring too.

Worth remembering it's now over 60 years old as well. The 1970s version had more exciting bits and no doubt the recet TV adaptation was chock full of CGI monsters BUT oldies like this have all the more charm when compared to the CGI-fests today.

I enjoyed it anyway! It's well-paced, well-written and a real story. 4 stars.