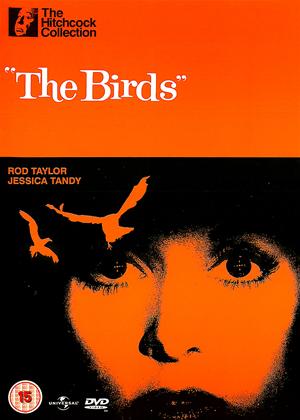 Reviews (5) of The Birds

This really uses subtle acting and camera skills to set the scene of suspense. A really classic film and would thoroughly recommend.

Dated special effects. A classic. - The Birds review by JD

With Psycho, Hitchcocks best known film. Famous for good reason. At the time the special effects were the best available. The scenes of bird attacks now however are shocking only to the naive and very young. I was only 11 when I saw this film first and was very scared. An adult watching this now would have to be very sensitive to be scared. The scenes of struggling with a clearly stuffed seagull are mildly amusing. It has a 15 certificate so this gives it a target viewer of 15 - 18 (any older would certainly see through the production) or 50 plus (watching it for a second time or just a Hitchcock fan who missed it).

I usually like films from legendary director Alfred Hitchcock.

His brand of suspense thrillers and technical film wizardry for the era are strongpoints. So it is with some degree of trepidation that my review of such a well known Hitchcock film is mediocre. The lowest I have rated one of his films.

It begins with some potential romance scenario where Brenner and Taylor meet each other in a pet store before the film cuts to Daniels driving up the California coast to a resort called Bodega Bay where Taylor spends weekends with his domineering mother Lydia Brenner (Jessica Tandy).

Eventually some bird action occurs as Daniels is attacked by a rogue seagull.

Scenes are shown featuring other bird species in attack mode such as sparrows and crows.

The horror of the bird attacks look tame by modern standards but I imagine back in 1963 they caused a stir.

In one scene a dead body with no eyeballs is shown.

The film was produced way before computer effects so relies on special effects from cameras and film. They do the job adequately.

The film ends quite abruptly without providing adequate resolution in my opinion. Questions are left unanswered. Why do the birds attack the coastal town?

Does outsider to the town Daniels have some link?

Tippi Hedren (as Melanie Daniels) and Rod Taylor meet cute and then fall in love against a background of an avian apocalypse, initially oblivious to the danger gathering around them and then overwhelmed by it.

There is a great horror moment in The Birds when a flock (or murder!) of crows gathers at Melanie's back while she smokes a cigarette outside a school. The scene looks wonderful, with the gothic frisson of Poe. We see the threat accumulate, of which the character is ignorant, and this corresponds psychologically with how the people of Bodega Bay are treating the coming storm. They are engrossed in trivial diversions, blind to an inconvenient truth.

Many directors would finish that segment off with a stab of music and a shock-cut to the playground full of birds. But Hitchcock has Melanie follow a single crow in the sky and track it all the way until it joins the mass of crows. And there's no music, just the voices of children singing a nursery rhyme. The tracking shot is a beautiful idea. What could be more peaceful and gentle than an empty sky with a single hovering bird, the serenity suddenly wrecked when she finally sees the whole picture.

Hitchcock's only supernatural horror (or sci-fi) film was a big box office hit and the spectacle of the attack of the birds is a triumph of set design and camera illusion. The soundtrack of bird sound processed through a synthesiser was innovative and powerful. Inevitably, the actors take a back seat to the effects but it's that kind of film. The story lacks an ending and it would be nice if Hitch had done a little more with the theme of man at war with nature, but it is a one of the best of the end of the world films of the period. Each scene is imaginatively designed and assembled to set an eerie note of fear against an ominous insinuation of catastrophe.

A rather quirky film in Alfred Hitchcock's canon but probably one of his most famous. It has all his usual build up of tension and dread although it does veer into romantic melodrama for much of the first third of the film. However once it gears up into the main story it is impactive, exciting and at times quite scary. Former model Tippi Hedren, one of Hitchcock's famous blonde 'discoveries', plays rich San Francisco socialite Melanie who, on a whim, heads out to the remote seaside town of Bodega Bay searching for Mitch (Rod Taylor), a man she fancies and hopes to seduce. As they begin a romance of sorts, the town is struck by strange, at first isolated, attacks by birds. These grow in intensity forcing Mitch, Melanie, his mother (Jessica Tandy) and young sister (Veronica Cartwright) to retreat to their house where they face an onslaught from the murderous birds. There's some shocking scenes but the film excels in its ability to create a contrast of calm with a sense of dread throughout, aided by there being no musical score. Hitchcock's well known hatred for location shooting means that the edits to studio shots occasionally are a little too obvious and there's too much use of back projection but that said there's equally some highly memorable stuff on display here, an overhead shot of the town from the viewpoint of the circling seagulls for example. The story offers little, if any, explanation for the sudden bird attacks unless you choose to interpret the film's constant reminder that humans keep caged birds as a possible cause of the birds behaviour, or put simply are the birds taking revenge on humans? It's open to debate in any case. This an iconic horror film and one every film fan should make sure they see, it's a film that stays in the memory for sure.