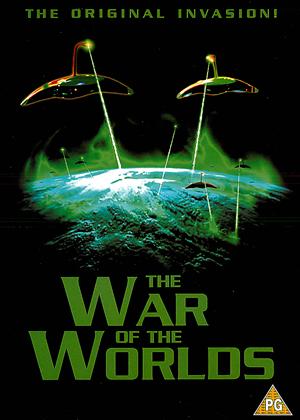 Reviews (3) of The War of the Worlds

wow, they sure don't make them like they used to! - The War of the Worlds review by CP Customer

I can remember seeing this film for the 1st time when i was only 6, and it scared the hell out of me! I remember peeping behing the sofa, and wondering if this could really happen, and thinking "why have those spaceships got lamp posts on top??" But to watch this film, was a treat, and you can see quite clearly, where SS ripped this film off. But this is the ORIGINAL - no mistake about this one. My score 8 - 10!

It may unsettle adults too! - The War of the Worlds review by CP Customer

When I was a kid I used to love this film, partially because I was probably too young to watch it, and partly because it scared me so much.

Now, twenty or so years later I saw it again, and it shocked me. So many films today rely on CGI to prop up an otherwise mediocre production, this suffered none of that.

It's a well composed piece, each individual section hits the right notes, and the sum is remarkably sinister and powerful. It sums up the spirit of the original novel in ways that seem lost on todays film makers.

In summary this film is one of the best Sci-Fi films ever and should justly stand ashamed of it's modern peers.

"Parental Guidance - general viewing but some scenes..." etc etc. Some children will find it unsettling, but then again so will the adults.

Sci-fi Classic. - The War of the Worlds review by Steve

George Pal's legendary production steered clear of the more reflective implications of HG Wells' classic novel and offered pure, magnificent spectacle. This was a leap forward for the visual reach of science fiction just as King Kong was for horror in 1933. The sets, effects (sound and visual), models and costumes are phenomenal.

The theme that would most inspire future film makers was a depiction of the breakdown in society. Law and order vanishes in an instant. The mobs actually smash the instruments that were going to be used by scientists to combat the invasion. There is looting. The ordinary people behave uselessly, resorting to panic, prayer and brutality. The blitzkrieg of the militarily superior invaders is brief. Soon, all the cities are abandoned, the left behind vaporised under the close scrutiny of the space ships.

Wells' estate was so impressed that they offered Pal access to any other of the writer's works. But while the film is a visual wonder, including the gorgeous technicolor, there are weaknesses in the script, particularly the lacklustre dialogue. The characters are archetypes and the unheralded cast does little with them. The pious religious sentiments are badly misjudged.

But this is a film of action, the one sided conflict between the civilisations pumped by Leith Stevens hyper-dramatic score. The War of the Worlds invented many of the future rules of cinema science fiction and it still works as a screen filling blockbuster and a landmark disaster film. And yes, the invaders' biological flaw which dooms their conquest is now more pertinent than ever.