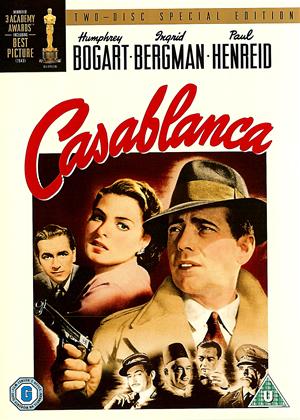 One of the great films. - Casablanca review by Steve Mason

Casablanca is perhaps the ultimate justification for the Hollywood studio system. It wasn't a prestige project. No one thought they were making anything other than a routine war film. But because Warner's had real salaried talent to call on, this transformed an unproduced one act play, called Everybody Comes to Rick's.

Casablanca is funny, like a quality comedy. It is suspenseful, like a thriller. It is set in an exotic location, ripped from the WWII headlines. It is a war film. It has action. In particular, the brilliant dialogue has made it a cult film, yet it is very popular, and is one of the few Hollywood mainstream films to have made a home in the critics' top tens. It is outstanding propaganda. It is a heartbreaking love story.

Casablanca is a sequence of wonderful, now legendary, scenes. It captured the sacrifice and uncertainty of war, and, despite its flaws, that is what makes people continue to come back to Rick's.