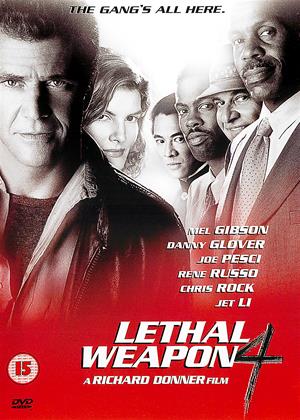 Good for a 3rd sequel - Lethal Weapon 4 review by JD

It is not often that such a good series goes past its peak. Don't get me wrong I liked it but the first few are better. Still has lots of great car chases, escapes and humour but some dross as well.

I recently had an urge to revisit the first Lethal Weapon movie, so naturally ended up doing all 4.

For the life of me I couldn't remember anything about the 4th instalment, and on re-watching it I understood why. It's totally forgettable.

It's a noisy film, explosions and gunfire naturally but SO MUCH SHOUTING. No character actually has a conversation they just bicker at each other and get louder and more animated as they do it, Chris Rock and Joe Pesci especially trying to outshout each other.

The plot is weak, the action just about passable but on the whole you get the impression the cast had more fun making it than the audience will ever have watching it.

Best stop at the second one, the third at a push !